Nestled away in the heart of Compton Verney, a stately home surrounded by luscious gardens designed by Capability Brown, is a room lined with women’s names. In a house built by men in an era dominated by patriarchal values, a young woman called Georgiana Verney decorated this room, painting a political statement onto the walls through the titles of ‘dummy books’.

Georgiana became mistress of Compton Verney in 1852, when she was only twenty-eight, and found herself widowed by the age of thirty-two. Rather than retreating from public life, she dedicated herself to championing causes including greater rights for workers, and woman’s suffrage. The titles that she chose to adorn her library reflected her belief in women’s right to write and to read — they included volumes as diverse as Sappho’s poems and Jane Marcet’s Conversations on Chemistry. The story of this room and woman who created it was lost when Compton Verney was restored from a near-derelict state in 1993.

Sophie Ratcliffe’s ‘Unsilencing the Library’ project breathed life back into the room and brought its history to public attention. The missing panels that would have originally housed ‘imitation books’ were restored to their original state, rediscovering the political statement that Georgiana was trying to make by lining the walls with titles by women. The room was also reimagined as a ‘Women’s Library’ for the twenty-first century. To add real books alongside Georgiana’s painted titles Sophie invited guest curators to pick books that have inspired them.

Curators including Emma Watson, local school students, and members of Prison Reading Groups all chose books to fill the empty shelves in Georgiana’s room, which Compton Verney’s 60,000 annual visitors could buy at the house. The exhibition was awarded the Vice Chancellor’s Award for Public Engagement, in recognition for ‘engaging a diverse range of publics’. The exhibition is still in place at Compton Verney, with a new set of curators for 2018-19. Given the success of the exhibition, Sophie intends to apply for follow-on funding to continue expanding the project. 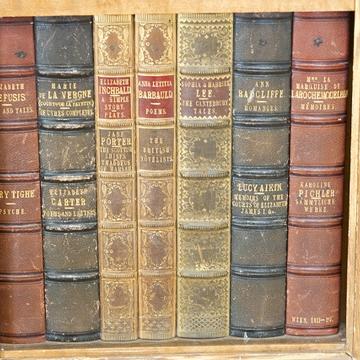