With the emergence of what historians such as Joanna Bourke call ‘total war’, the boundaries between the war front and home have increasingly become blurred, with mass-scale displacement, starvation and deadly epidemics becoming obvious consequences of war today. Many isolated regions, largely unknown to the rest of the world are home to endless violent conflicts. The North Eastern Region of India is a vast territory which was formerly considered by officials of the British Empire as wild and unyielding, home to many head-hunting tribes and recalcitrant chieftains. In January 1941 a rumour was spreading rapidly in the region: that of an imminent Japanese invasion. By 1942, the Japanese forces, having overrun Southeast Asia, reached the eastern banks of the Chindwin River, a few kilometres from the borders of Manipur, a ‘native’ state in the region. Though a direct invasion was delayed, the region became the target of Japanese Kawasaki bombers reducing many towns and villages to ruins.

In December 1942, the region was declared an ‘Operational Area’, and the administration was handed over to the commander of the Allied forces in India. War preparations were begun on a large scale to defend the British Empire in Asia. In 1944, ‘Operation U Go’ was launched by the Japanese forces to destroy the Allied positions in the region and was successful in occupying several towns and villages around the town of Imphal until their advances were halted by a spirited retaliation by Allied troops. This culminated in the twin battle of Imphal and Kohima between 8 March and 3 July 1944, one of the most significant battles in the eastern front of the Second World War. The Allied forces lost between 15,000 and 20,000 troops, and the Japanese anywhere between 50,000 and 70,000 during the twin battle. The Japanese imperial ambition in Asia was thus halted in Imphal and Kohima by the Allied army, although many more Japanese casualties ensued during the torturous retreat from Imphal, with many dying on the return journey due to exhaustion, starvation, infection and malaria.

Manipur and the Naga Hills/Nagaland are, today, two provinces in the North-eastern corner of the Indian state, still struggling economically as a result of constant conflict in the region since the Second World War. War did not end after the surrender of Japan, as the region resisted the entry of the post-colonial Indian state immediately after the war. Between 1992 and 2001, 12,181 people including large numbers of civilians were killed during the fighting between the Indian state and the armed political outfits in the region. The struggle against the Indian state continues even today, however some form of illusory peace has returned to the region after the signing of several peace accords and ceasefire agreements with various armed political groups.

What is tragic and ironic is the fact that selected and sanitised memories of the Battle of Imphal and Kohima have recently been invoked in developing a thriving war tourism industry in Manipur and Nagaland during the last 15 years or so. Tourism has been identified as a major ‘driver of economic growth’ by the Ministry of Development of North Eastern Region, and the region has been portrayed as a ‘Paradise Unexplored’ for tourist consumption. On 30 December 2010, the government also lifted the 60-year-old Protected Area Permit Regime to facilitate easier entry of foreign tourists to the region. Including these recalcitrant regions in the tourist map is very much part of the aggressive nation-building project of the Indian state.

However, ‘war tourism’, a distinct type of tourism emerged in the region largely independent of the Indian state intervention. War veterans (Japanese and British) have been visiting the region for a long time – made easier through the lifting of the restricted travel permit – although it was the efforts of various NGOs, war veterans and their organisations, historians, local guides and individuals who were responsible for the emergence and growth of war tourism in the region. The Japanese government has recently shown some interest in promoting war tourism in the region by funding trips and investing in the building of a war museum.

Building monuments, museums and maintaining graves have been part of war commemoration in the region for many years. The Commonwealth War Graves Commission maintains the graves of the Allied soldiers while the Japanese have built a peace memorial at the battle site to commemorate their fallen soldiers. The Indian state also built a memorial to commemorate the Indian National Army and Subash Chandra Bose in Manipur. The Second World War Imphal Campaign Foundation was founded in 2007, registered as a trust to conduct research and spread awareness of the war among the people. Subsequently well-planned tours were developed in the region which catered to the needs of British, Japanese and American tourists. Unlike the earlier tours which were confined to the war graves and memorials, tourists are now taken to the original battlefields, villages, and the sites of camps, trenches, airstrips and jungles, accompanied by a well-researched chronological narrative of the battle by the guides. Many large- and small-scale commemorations have been organised with the involvement of local commemoration committees, veteran organisations and foreign governments such as Japan and Britain.

While these developments have renewed interests in the history of the war among locals and have generated employment for local guides, hospitality and hotel business in the region, none of these monuments, museums and organised tours commemorate the local narratives of war, local war efforts or local heroes of the war.They commemorate the memories of empires, old and new. The war which is locally known as Japan Laan/Gaal, was not kind to the local populations. It brought death, destruction, large-scale displacement, new diseases, significant loses/damages to public and private property, starvation, forced labour and sex slavery to the region. Thousands of people wrote petitions between 1945 and 1955 to various governments seeking relief, rehabilitation and monetary compensation, and these petitions are testimonies of their war experiences which are mostly ignored by these various forms of commemorations. The nature of commemorating the Battle of Imphal and Kohima, begs interrogation as to whether all war commemorations are similarly imperial and statist.

Deepak Naorem was a speaker at the conference ‘Post-War: Remembrance, Recollection, Reconciliation’ at the University of Oxford on Saturday 26 May 2018. 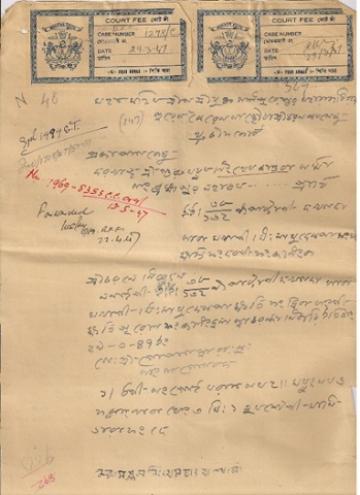