My application to Oxford began with an apology and a quote from Tolkien. ‘This application is 22 years late,’ it said ‘but not all those who wander are lost.’ BAME students are underrepresented at Britain's top educational institutions and it is not for lack of ability. Arriving at Oxford I was surprised at how at home I felt.

I found that people in the University were more willing to discuss issues pertaining to diversity than I expected. Many people said the same thing 'we are just not receiving as many diverse applications as we would like.' The reasons for this are complex but I intimately understood one of them as it took me so long to apply. If someone like me, who went to an English public school,  found the whole process daunting then what about someone else who did not have the privileges I did?

When discussing diversity at Oxford it suddenly occurred to me that I didn't even know who the first African woman to graduate from Oxford was. Lady Kofoworola Ademola attended St.Hugh's from 1932-1935. My research led me to a book called Black Oxford: The Untold Stories of Oxford Universities Black Scholars by Pamela Roberts, which I have reviewed in an earlier posting on this blog (see http://www.torch.ox.ac.uk/review-black-oxford-untold-story-oxford-university%E2%80%99s-black-scholars-pamela-roberts ). I ended up as a researcher on the Women in Oxford project and was involved in recording a podcast about her life, launched in October 2016.

What struck me most as I delved into her life was that had I known it, her story might have encouraged me to apply to Oxford 2 decades earlier. Our backgrounds shared many similarities and her autobiography touchingly describes the struggles and joys that she went through studying at an English public school, and what it felt like to be a young black woman developing an identity in a milieu different to that of her own family’s culture.

The University, recognising the power of story, has embarked on a series of projects such as the much-feted  Diversifying Portraiture project, to begin to show the different faces of Oxford University. It will take a multifaceted approach to increase the number of applications from BAME students, but perhaps if more stories are shared then they can provide an example for those who need the inspiration to know this: studying at Oxford can be possible for them, as indeed it was for someone else 'like them.'

Image to the left: Lady Ademola visiting St. Hugh’s in the 1990s.

Main image: Lady Ademola during her time at St. Hugh’s

JC Niala is completing the MSt in Creative Writing at Kellogg College, University of Oxford. 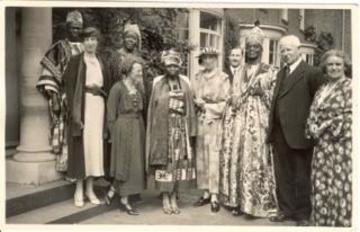