Why refugees are an asset in the fight against coronavirus

Some of the most devastating consequences of coronavirus will be in the developing world. Among the most vulnerable
are refugees, 85% of whom live in low and middle-income countries. The numbers of confirmed refugee cases in Africa, for example, is unknown but probably tiny.
However, the indirect impact of lockdown measures is already significant.

Within refugee camps, self-isolation and social distancing to prevent spread of the virus are nearly impossible to implement,
and people are anxious amid the spread of misinformation. Meanwhile, many international staff from non-governmental organisations (NGOs)
and the UN have been pulled out of refugee camps. Other international humanitarian organisations have significantly reduced their capacity and
funding is stretched to breaking point or diverted.

Refugee-led organisations have long played an important but neglected role in providing protection and assistance to other refugees – and host communities – in camps and cities around the world. As we have shown in a new book,
there are hundreds of such organisations, supporting social protection in areas such as skills training, education, health and social insurance.

Many provide services that our research shows are highly valued by their communities, and some operate on an impressive scale. However, they have rarely received international funding from a humanitarian system still premised upon a strong separation
between the provider and the beneficiary. And such organisations are almost never recognised as key operational partners by the UN system.

The work of these refugee-led organisations is now more relevant than ever as the formal structures of humanitarian aid struggle to respond to the consequences of COVID-19. They are already doing life-saving work, and they need to be far better supported.

Much of the international humanitarian community’s focus in terms of coronavirus response is on refugee camps, which have especially high population densities. UN agencies are desperately raising funds to support international NGOs to distribute soap
and other essential items, provide information, and strengthen health facilities in camps around the world.

However, the capacity of the international humanitarian system is currently unable to meet the needs. The UNHCR, the UN Refugee Agency, is stopping missions into
camps, and global resettlement of refugees has been suspended.

In Uganda, home to around 1.4 million refugees, lockdown has been in place since March 31.
Refugee-led organisations are already making important contributions to help provide support in both camps and cities.

In the Nakivale Settlement in the south-west of Uganda, the Wakati Foundation (meaning “passing of time” in Swahili) has been sewing masks
and distributing them to the community. Its founder, Alex Mango, set up the organisation in 2013. It employs refugees to work on small-scale building projects, while providing training and employment to up to 250 refugees per year on an annual budget
of around US$75,000. Faced with the crisis, it has adapted, employing refugees to produce colourful face masks while also raising awareness among the community about the virus.

Further north in Arua, the Global Society Initiative for Peace and Democracy is building an information campaign focusing on preventive measures relating to hygiene and sanitation in the refugee camps to
help slow the spread of coronavirus. The UNHCR recognises the value of supporting local providers in the current context and is trying to work with several national NGOs in Uganda’s West Nile region and funding at least one refugee-led organisation
called Community Empowerment Technology Network (CTEN). However, the UNHCR doesn’t have funding for even these additional activities, or to adequately support refugee-led
organisations.

Many of the most acute challenges are actually in urban areas. Based on our conversations, some refugees report being less afraid of the virus than of its secondary consequences: restricted access to food, medicine, and basic services. In Kampala, for
example, many refugees face severe food shortages because
of the lockdown. The government publicly announced on national television that “refugees should be in the camps” and that “non-nationals will not get food aid” except in refugee camps. The UNHCR has recognised in its urban coordination meetings on
COVID-19 that refugees in Kampala need urgent support, according to attendees we’ve spoken to. Yet, it is struggling to meet food and medical needs because of a combination of practical and funding constraints.

Urban refugee-led organisations are trying to fill gaps in cities too. Hope for Children and Women Victims of Violence ordinarily supports around 1,300 refugees a year through vocational training, psychosocial support and English lessons. In the current
crisis, it has been distributing food and soap to refugees and Ugandans in the Ndejje area of Kampala, with over
400 beneficiaries. Meanwhile, Young African Refugees for Integral Development (YARID), an award-winning organisation, has distributed baskets of flour, soap, beans, sugar, and
cooking oil to the most vulnerable in the community. It has identified recipients through community networks, and delivered food on bodaboda (motorcycle taxi) where needed. So far it has reached more than 200 households.

The response by refugee-led organisations is not unique to Uganda. In Nairobi, for instance, many organisations are providing assistance amid lockdown conditions. Youth United for Social Mobilization (YUSOM),
a non-profit youth organisation based in Eastleigh, has launched a coronavirus public information campaign in collaboration with other community organisations.

Refugee-led organisations can play a range of roles in the current crisis, including distributing supplies, disseminating public
information, serving as community health workers, tracking and monitoring, and influencing social norms. While many organisations lack capacity, they often have a comparative advantage in terms of community-level trust, social networks, and adaptability
– all crucial in the context of a pandemic. They cannot be a substitute for traditional humanitarian assistance, but they can complement the wider response.

The World Humanitarian Summit in 2016 resulted in a Grand Bargain agreement which placed a strong
emphasis on the concept of “localisation”, which recognises and supports people affected by crisis as important first responders. However, a significant gap remains between the rhetoric and reality surrounding this agenda, especially when it comes
to working with organisations run by refugees. For the most part, the few organisations that thrive have done so by bypassing the humanitarian system altogether and raising funding through international networks.

The UNHCR is willing, in principle, to work with these refugee-led organisations, particularly in the current context. In Uganda, it has provided small grants to CTEN in Arua and YARID in Kampala in the past. It has also encouraged refugee-led programming
as part of a peacebuilding programme for young South Sudanese refugees in the West Nile region of Uganda.

But funding for such activities is virtually non-existent. In 2019, UNHCR Uganda was not even able to meet its core budget requirements
for health and education following a financial mismanagement scandal that led to increased donor scrutiny. Most donor governments place significant accountability and compliance standards on grant recipients, which the majority of small-scale refugee-led
groups are unable to meet. And UN staff complain that refugee-led organisations can be challenging to work with, generally lack capacity, and are sometimes highly critical of the UN and international NGOs.

Meanwhile, national governments and national NGOs, especially those that hold privileged “implementing partners” status with the UN, are often suspicious of refugee-led organisations. In Kampala, there has been just one national UNHCR implementing partner
for much of the past two decades, a national NGO called InterAid, which is favoured by the government but widely criticised by refugees.

More advocacy is needed to highlight the valuable role played by refugee-led organisations, and to ensure that their contribution is recognised by UN agencies and donor governments. But this alone is insufficient. Specific mechanisms are required to identify
effective organisations, build their capacity, transfer money, and ensure accountability.

Donors may need to be willing to accept higher levels of risk and reduce compliance standards. Most government donors worry about accountability to their own electorates, and this has been a particular issue in Uganda. Private money and pooled funds may
be necessary to mitigate risk while piloting new funding mechanisms.

An opportunity for lasting change

At a global level, refugees are beginning to coordinate. The Global Refugee-Led Network (GRN) held an event on April 8 in which it called for greater support for responses “by refugees for refugees” during
the pandemic. And there are growing voices of support.

The Open Society Foundation is among the first funders to mobilise resources in support of refugee-led organisations in the context of COVID-19. There
is also an increasingly receptive audience, including from individual countries’ aid agencies. Numerous governments have signed the GRN’s Refugee Participation Pledge, including Canada,
Australia, Denmark and the Netherlands. At the multilateral level, at least, the UNHCR also seems more receptive than ever to the idea of working with refugee-led organisations, having supported their presence at major events such as the Global Refugee Forum in
December 2019.

The starting point needs to be to build a coalition of people willing to take this seriously – one that includes refugee-led organisations, donor governments, foundations, NGOs and academics. Its focus should be on mapping organisational capacity, building
best practices, and piloting new delivery mechanisms to get resources into the hands of frontline providers.

Historically, there has been a glaring asymmetry of power at the heart of the international refugee system. The participation of refugees, let alone their organisations, has rarely been encouraged. In the current crisis, there are strong imperatives to
change this as a matter of necessity.

If new partnerships can emerge, the current crisis may represent a unique moment of opportunity to build lasting models of participatory and inclusive humanitarian governance.

This article is republished from The Conversation under a Creative Commons license. Read the original article. 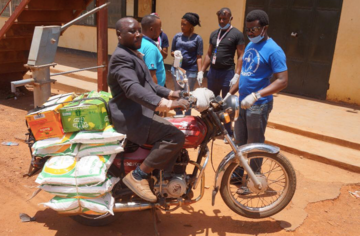