Why Rethink Modern Greek Studies Today: Notes from the Front of Cultural Analysis 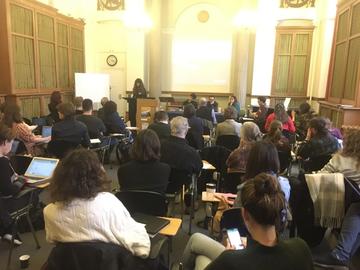 The reason we decided to put together this partnership and network is quite simple: working and teaching in similar areas for years – at the intersection of modern Greek studies, comparative literature, gender theory and cultural analysis – we have become aware (sometimes painfully aware) of the challenges that the cultural and social study of the Greek world still faces. Especially in the last decade, the urgency of rethinking approaches to the study of modern Greece has been intensified, with the state of Greece being in the centre of the world’s attention for a number of reasons related to the sociopolitical challenges it has faced, but also, crucially, thanks to social and cultural responses that emerged from the country itself: from the refugee solidarity movements and the examples of collective organizing and social activism that sprung all over Greece, to domains of artistic regeneration such as cinema, theatre, poetry and graffiti.

Cultural and artistic production during the decade known as the ‘Greek Crisis’ was largely received through this dominant framework – as a product of, response to, or intervention in, ‘the Crisis.’ The problematic and reductive aspects of such a framing but also the potentialities it opened up have already created a need for revising our analytical and theoretical tools to address the complexities of a radically shifting reality in present-day Greece. This need involves not only the study of contemporary Greek culture as such, but also the way present cultural production prompted a recasting of the (Greek) past in ways that were well worth our attention.

Since 2018 political discourse in the country shifted to a vocabulary of recovery and rebuilding, yet no new singular framework for understanding the most recent cultural production seems ready to ‘dethrone’ the dominant crisis-framework. Very recently, the ongoing global covid-19 crisis has come to further complicate the transversality of the crises Greece still faces. The cultural narratives that would capture this complex, dense, and disorienting ‘now’ and the futures it could lead to, are yet to take shape.

As scholars in modern Greek studies, we face the challenge of finding adequate (new or old) theoretical vocabularies and grammars to capture and critically address these shifting realities in Greece and beyond. How can we respond to crisis as a new norm, to neoliberal governmentality at its widest expansion, to the plight of refugees and the questions of citizenship that the refugee question raises, to the shifting boundaries of the public, the private and the privatized, to the constant necropolitical sites operating within and on the margins of the Greek state, to the untold and disavowed histories of gender abuse and homophobia, race and racism, expulsion, exclusion and classism? Cultural responses to this thick moment have been strikingly alert to the topicality of such questions as well as their globality and their intersectionality: a participatory cultural analysis can only share their energy and inventiveness.

In the process of organizing this network and its first conference and other activities, we became more and more aware not only of the need to return to the recent period of Greek culture and re-tell that history, but also to reflect on our analytical models and presumptions. Recent years have brought to the fore the position of Greece (in terms of geography, economic development, international governmentality); they have also radically questioned the assumptions Greece’s “worlding” has traditionally been resting on. How do terms such as “the south”, “the Mediterranean,” east/west, first/third world, cryptocolonialism, dominion, impact on Greece? What have they meant for its history, and how have they been influencing its historical presents? Broaching these questions has meant the need to move out of the insularity of Greek studies, to think the object of study and our methodologies in less (pen)insular ways. It has also meant the need to rethink the practice of comparatism.

Work in cultural analysis is always already comparative nowadays; even when it speaks only about Greek cultural texts and contexts, it draws on theoretical concepts and approaches that situate Greek culture and society in larger discursive frameworks and in scholarly, social, political, and artistic debates that exceed a narrow understanding of Greek culture and make it part of transnational constellations. The field of Modern Greek studies has, of course,  always involved multiple disciplines; but not all of these disciplines have always been intersecting in substantial and meaningful ways. In addition, not all scholars whose research focuses on aspects of Greek culture and society – be it in art history, anthropology, archaeology, architecture, or other domains – felt, or still feel today, connected to modern Greek studies as a field. Through this network, we want to critically address such tendencies and assumptions. We invite (inter)disciplinary conversations that can test the blind spots and limits of different disciplines. We also want to showcase the fascinating (inter)disciplinary work that scholars – especially young scholars – in Modern Greek studies are already doing: work that holds the prospect of renewing, enriching, and indeed, redefining, Modern Greek studies as a field and its relation to other fields.

We chose cultural analysis – a term we often prefer over cultural studies – as a common denominator in our network and its first conference. This interdisciplinary practice – proposed and developed by cultural theorist Mieke Bal, who also founded the Amsterdam School for Cultural Analysis – resists the tendency to use cultural objects as illustrations of a pre-existing argument or theoretical scheme. It calls instead for intimate engagement with the object of study through close readings that are always attentive to the object’s situatedness: the context of its making and the multiple other shifting contexts in which it is called to function and in which it intervenes. The starting point for our approach to cultural objects of the past and the present is the “now” in which we are also shaped as subjects and as scholars. Yet this is not a presentist approach; it is one that acknowledges the entwinement of past and present not in terms of unidirectional influence of the former on the latter but as a perpetual exchange – involving dialogue, conflict, tensions, mutual influence – that unhinges both past and present and makes them porous. In the practice of cultural analysis, the study of the present is never self-sufficient, but pays heed to specters of the past – a past we understand as a dynamic archive being revis(it)ed from this present – and to specters of potential futures.

Cultural analysis uses concepts as theoretical and analytical tools – “mini-methodologies” as Bal calls them. These tools guide our engagement with cultural objects without crystallizing into rigid methods. The meanings and operations of these conceptual tools shift through their encounter with cultural texts, calling us to approach cultural texts on an uncertain, shifting ground and form our own ‘field’ in the process of this engagement. In our own research, new critical concepts, such as the concept of archive trouble or the rising figuration of the middle voice in recent Greek cultural texts, were borne out of the cross-fertilization of art and criticism in our own practices of cultural analysis.

Such categories also perform a double critical function: they explicate contemporary cultural works, historicize, contextualize, theorize on them; but, in so doing, they also offer an implicit critique of problematic analytical models of the past. A cultural analysis network today does not underplay the role of literature; but it interrogates the predominance of the literary in institutionalized national culture and draws attention to artistic forms and genres that have fallen through the cracks of Greek canonical culture. It does not underestimate the cultural work of the nation; but it showcases and deconstructs the nationalist assumptions its criticism has in the past promoted. It understands the strategic value of exceptionalism but it opposes its ideological instrumentalization. It maps and often holds on to mainstream criticism of the past, while also being ready to underline its essentializations, its marginalizations, its violence.

In our first meeting, many of these questions and insights became prominent through works that focused, for instance, on the “elsewheres” or “hetero-chronotopes” of Greek literature through the case of Cavafy; on imaginations of Greece in Portuguese poets; on Greek writers abroad excluded from the Greek canon, as in the case of Theodor Kallifatides; with narrations of Europe in recent Greek literature, as in Angela Dimitrakaki’s Aeroplast; on anti-nationalist mythologies in the work of canonical writers like Ritsos and new frameworks for discussing the lasting legacies of Greek modernism; on the far-right’s appropriation of canonical writers like Cavafy; on photographic depictions of the Aegean archipelago that offer alternatives to territorial, nationalist thinking; on disavowed gender and social critiques of the Greek weird wave; on artistic and literary figurations of marginalized others – refugees and migrants in particular; on the intersection between refugee studies and Greek studies; on the rise of gender violence and homophobia in the Greek domestic space and its public representations; on cultural industries during the Crisis; on the transversal discourses of Crisis and their political uses.

In future meetings and the developing work of the network we aim to spend more time and intellectual labour on other issues too: on shifting the contours of Greek literature through a focus on marginalized authors and literary traditions, as well as literary voices – accented, hyphenated, bilingual, multilingual, exilic, diasporic, migrant –  that renegotiate and broaden our understanding of what constitutes Greek or national literature today; on non-eurocentric thinking about Greece; on the cultures of biopolitics (including the contemporary biopolitical uses of antiquity); on the often intersecting legacies of Greece’s orientalization, modernization and neoliberalization; on the rise of performance and Greekness as performance; on the disavowed archives of racialization and racism; on alternative conceptualizations of Greek citizenship; on alternative, unknown or suppressed histories or on histories of unrealized futures; and on work that brings new perspectives in environmental humanities to bear on Greek reality and calls us to rethink past and present cultural texts in this light.

This is certainly not an exhaustive list; it has not even been conceived as a list. We think of it, rather, as an open-ended mapping and constant invitation; as a pressing analytical mobilization; and, most importantly, as a call for participation.

Maria Boletsi is Marilena Laskaridis Chair of Modern Greek Studies at the University of Amsterdam and Assistant Professor of Fim and Comparative Literature at Leiden University. For further information, see https://www.torch.ox.ac.uk/people/professor-maria-boletsi

Dimitris Papanikolaou is Associate Professor of Modern Greek Studies at the University of Oxford. For further information, see https://www.torch.ox.ac.uk/people/dimitris-papanikolaou