Will Machines Make Us Laugh

Six comedians, five episodes, and one question. Will Machines Make Us Laugh? While this was the over-riding question for this engagement project funded by Futures Thinking, the underlying presumptions are equally interesting. How do we think about AI and how it might function? What does the Turing Test still have to offer? Why is context so important to comedy? Can a machine replicate a joke? What constitutes prejudice in an AI’s output? What do robots have to laugh about? What is the purpose of laughter?

Anyone working concretely, materially, in the field of Artificial Intelligence knows that an artificial general intelligence is years if not decades away in terms of functionality, and that what we refer to as AI in common parlance is machine-learning, or in some cases, simply high-end maths. Kanta Dihal and Stephen Cave have collated some important work on the topic of narratives of AI and AI-focussed narratives in their very recently released edited collection AI Narratives: A History of Imaginative Thinking About Intelligent Machines (Oxford University Press, 2020) and they are co-authoring AI: A Mythology which is forthcoming.

What we think of as Artificial Intelligence (AI) is often just Intelligent Automation (IA), Pattern Recognition, Machine-Learning, or rather more carefully worded ‘the field of AI, not yet AI’. As anthropologist Beth Singler notes, it’s important for us to recognise how these narratives of AI work, because they are often bound up in our imaginations and in much of our discourse with religious symbolism. Being ‘Blessed By The Algorithm’ Singler notes, presumes a god-like presence at work, and elides the human element. Too often  the programmer leaves the picture, taking with them their positionality, inherent biases, prejudices, and other personality foibles, and leaving behind a system that the end-user presumes to be ‘neutral’.

In 2019, Marcus du Sautoy’s The Creativity Code proposed the Lovelace Test, which requires that a machine produce something ‘new, surprising, and valuable’ that is inexplicable by the machine’s programmers. Creativity, and the human consciousness that enables it, du Sautoy argues, is still irreproducible.

In conversation with a colleague at UdK in Berlin recently, I heard a reference to two kinds of AI: AM and FM. Actual Machines, and F**king Magic. Where AI development is at the moment (and granted developments are frequent, I may be proven wrong in a week’s time), it is the task of the human programmer to produce the FM. What is often more interesting in this kind of early-stage research into arts-applicable AI is how we think and talk about it. The disjuncture between what AI is and what we think it is, is hugely influential in how the technology will develop, be implemented, and importantly for researchers, how funding will be allocated.

Considering the human element of programmers and the data sources from which a machine must learn, the Will Machines Make Us Laugh? project came out of a desire to learn about the real-world implications of how a future technology might work in an overtly human and context-driven circumstance: stand-up comedy. In conversation with comedian, producer, and philosopher Alex Farrow, I devised Will Machines Makes Us Laugh? as a series of interviews with some of Britain’s up-and-coming comedians as well as Oxford-based talents on the topic of machine-assisted laughter.

In a series of interviews with Farrow of Jericho Comedy, comedians share their takes on the threat, or not, of AI, and how it might impact on the production of this most human of reactions: laughter. Olga Koch, a computer science graduate, comedian and actress, shares how she devised an ‘AI’ for her recent show If/Then. Daman Bamrah explores the ethics of using an AI to write punchlines, and Chelsea Birkby talks about authenticity and mind-body dualism. Ahir Shah shares his comfort in his job security, arguing that machines cannot replicate the human element of stand-up, and Dan Squire talks through how artificial general intelligence (AGI) might change how comedians, content-creators and artists become successful. This series is intended to provide insight into comedy practitioners’ expectations for the future of AI technology, and to propose some initial questions about authenticity and the ethics of artistic production in the context of a very human-interaction oriented art form.

All of the episodes of Will Machines Make Us Laugh? will be available in Futures Thinking’s resources from 19 June 2020. Feel free to drop us a line at futuresthinking@torch.ox.ac.uk if you have any thoughts or comments on the content of the series. 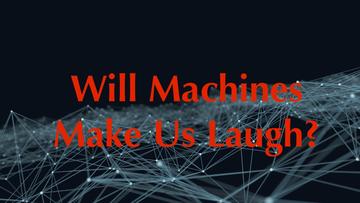