‘Women & Power: Redressing the Balance’ was a 2-day conference which took place on the 6th and 7th March 2019 at St Hugh’s College, Oxford. The conference was jointly convened by the National Trust and the University of Oxford to reflect on programming around the 2018 centenary of the Representation of the People Act which granted some women the right to vote. Contributions were invited through an open call and the resulting programme brought together academics and heritage professionals from a wide range of institutions, roles and subject areas to share their work, reflect on practice, and look forward to the future of researching and programming women’s histories.

Thanks to generous support from TORCH and the Women in Humanities programme, it was possible to offer a number of bursary places at the conference. Recipients have contributed to a blog compiling reflections on the conference; the full blog series can be viewed here.

I was delighted to attend this conference as a representative of the Network for Change: a London based group for women museum leaders which enables the sharing of ideas, concerns, problems and successes in a mutually beneficial and trusting way. So much of the two-day conference seemed to share in this common purpose.

I was struck during the sessions I attended at the Pitt Rivers Museum by two instances in which women who previously lacked confidence were empowered through their work to make significant contributions in the field.

The museum shared their experience with us of being a main partner in Multaka-Oxford, a project established to create inclusive volunteer opportunities and to use museums and collections as a ‘meeting point’ for bringing people together. One of the speakers, Nuha Abdo – who runs the group Syrian Sisters and is paid for 1 day per month as a consultant at the museum on the project – told us that previously “what happens in the museum is very nice but not useful for the community”. By exploring textiles in the museum’s collection together this group of women were encouraged to meet others outside of their community, helping them to grow in confidence. The museum’s staff likewise revealed they had gained a huge amount of knowledge from this exchange.

The museum’s exhibition Intrepid Women was another example of this. It revealed the stories of six female ethnographers who had undertaken fieldwork and collected for the museum during the past century (challenging common misconceptions that men collected everything). The curator told us the story Barbara Freire-Marre (1879-1967), the very first woman to enrol on the Oxford Anthropology Diploma in 1906. She received a distinction in 1908 but was prevented by the University from collecting her degree (as was the rule for women at that time). Barbara went on to do her fieldwork with the Pueblo people of New Mexico but lacked confidence in her work and in her diaries put herself down for not being able to come up with any grand theories. In actuality, she completely undersold herself: her fieldwork was meticulous; she carefully documented the full names of everyone she interviewed; and she established respectful relationships with all those she worked with that she maintained until her death. Effectively, she set precedents for good practice standards of fieldwork that are still upheld by ethnographers and anthropologists today.

For me, these two highlights and the conference overall was a powerful reminder of the collective confidence that can be nurtured by coming together and sharing our experiences.

Polly Richards is a freelance Interpretation and Master Planning Consultant. She is part of the ‘Network for Change’ which provide opportunities for women leaders in the cultural and heritage sectors to network in an environment which allows for the sharing of ideas, concerns, problems and successes in a mutually beneficial and trusting way, and is one of the organisers of the ‘Space Invaders’ event series. 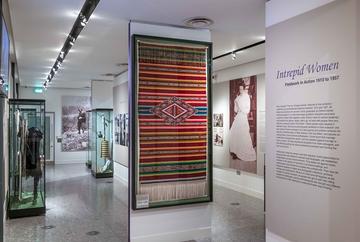