Women Retold: Eurydice and Portrait of a Lady on Fire

Victoria Leonard is a Postdoctoral Researcher for the project ‘Connected Clerics. Building a Universal Church in the Late Antique West (380-604 CE)’, funded by the European Research Council. The project is based at Royal Holloway, University London, and the Austrian Academy of Sciences, Vienna. Victoria has published articles with Vigiliae Christianae, Studies in Late Antiquity, and Gender & History. Victoria is a Research Associate at the Institute of Classical Studies, University of London, and a Fellow of the Royal Historical Society.

This blog post explores how the film Portrait of a Lady on Fire weaves a tissue of women's lives, intertwining the fierce desire for autonomy across generations of women made contingent upon men, and reminding us that behind every history is another history.

The film Portrait of a Lady on Fire is a devastating account of the perennial tragedy of the existence of women; like the discovery of love, it is ever old, ever new. Céline Sciamma’s masterpiece rediscovers the tragedy in eighteenth-century Brittany, bringing it to a knife-sharp edge. The tragedy redoubles as the universality of the unfolding and folding closed of women’s lives throughout history is realised.

The film begins with the termination of an unwelcome betrothal of a young woman to an unknown man in a foreign place. This familiar narrative is jolted into dissonance and made unfamiliar; the woman’s body lies broken at the bottom of the cliff, the household is in disarray. How do you know if it was suicide, asks Marianne? because she didn’t cry out. A silent but determined act. But one that does not deter her mother’s intentions to fulfil the betrothal for the next daughter in line, Héloïse, brought from the convent with no dresses to wear but her nun’s attire. She is confined within the house by her mother for fear she would tread her sister’s path to the cliff, but Héloïse dreams not of dying but of running.

A talented artist, Marianne has been employed to paint Héloïse’s portrait for the approval of her intended husband in Milan. Her refusal to pose forces the complicity of Marianne and Héloïse’s mother, La Comtesse, in presenting Marianne as a walking companion for Héloïse. Marianne secretly studies Héloïse during the day to paint her alone at night. The relationship between Marianne and Héloïse develops as their understanding of each other and themselves grows, brought to a climax of all-consuming love edged with anguish in anticipation of Héloïse’s removal to Milan.

The film is not violent, but violence underlies the film, just as the film is not explicit but erotic. This, despite the disproportionate ‘sexualised nudity’ warning flashing at audiences at the outset. The violence perpetrated by men against women is entirely unrepresented, but it is nevertheless central; we see it in Héloïse’s sister’s death, in the servant Sophie’s abortion and not the act of conception, in the headless portrait of Héloïse produced by the male artist who failed to paint her, and most of all in the impending violence of Héloïse’s marriage to which she does not consent. Héloïse evokes the early Christian martyr awaiting her fate; she is at once resigned and resistant, angry, outraged, scared. And in some senses the tension of the film rests there, at that crucible: by her beauty, by her sex, by her existence, does she ask for it? Is it her fault? Or rather, can we blame her?

Marianne’s sense of entitlement to condemn Héloïse, to see her complicity in the heteronormative promise that awaits, derives from her attempt to possess Héloïse, to own her like a territory, meant for no other. Her condemnation is quickly and desperately rescinded following Marianne’s realisation that she is wrong, that love can only be where there is egality, and that she cannot possess Héloïse.

The distancing so artfully achieved at the outset for the viewer lessens as the intimacy between Marianne and Héloïse grows. Héloïse’s elusive regality becomes less prideful, and is gradually revealed as the desperate tools of a young woman trying to determine the course of her own life. All four women characters are gradually revealed in this way, as struggling to determine their own agency: the Comtesse intends to shake away her quiet life in the backwater of Brittany through her daughter’s marriage; Héloïse chooses the music and books offered by the convent and refuses marriage; Marianne submits her work as an artist under her father’s name; and Sophie resists the burden of motherhood through abortion. All of these women are reckoning with self determination and agency, despite their differences in class.

The women all seek a way out from the oppressive patriarchal structures where women are objects for exchange and their lives proscribed by men in roles only as wives, mothers, and housekeepers. The negotiation of women by women with women to secure their place in the world is most clearly represented when the Comtesse, Marianne and Héloïse come together to judge the portraits of Héloïse, to weigh their worth, to see how far they will get her. The sexualised male gaze is not represented, but it is felt nonetheless; loosen your scarf, Marianne tells Héloïse in her pose; you are thinking of my husband, Héloïse retorts as Marianne’s brush strokes the whiteness of her neck onto the canvas.

The film swims against the tide of tellings; all of history fails the Bechdel test, and women’s narratives are second, if at all, to men’s. Without harried outrage, the film retells women simply by showing their retelling.

In an intimate, candlelit scene, Héloïse reads Ovid’s Metamorphoses to Marianne and Sophie. She reads the story of Eurydice who was fatally bitten by a snake and descends to the underworld. Her distraught husband, the bard Orpheus, follows her to appeal to the chthonic gods to restore Eurydice so that he may enjoy her until her due of years are ripely completed. Moved by his appeal, Persephone and Hades allow Eurydice to leave on one condition: that Orpheus walk in front and not look back, otherwise the request is forfeit. Orpheus cannot help himself and turns before he crosses the Taénaran gateway, the entrance to the underworld. Eurydice sinks back into the darkness, catching at her lover’s hands but finding only air.

Sophie’s unfamiliarity with the story leaves her outraged at the cruel injustice of Eurydice’s lack of reprieve; disbelieving, she demands that Eurydice’s story is again retold, and explodes in anger at Orpheus’ stupidity, his carelessness, his selfishness, and the eternal consequences for Eurydice. Why did he turn around? All he had to do was wait! Marianne is more sanguine, finding the excuse in Orpheus’ actions, but it is Héloïse who offers the unrealised perspective, voicing the silenced Eurydice and her call to him before he reached the threshold, securing her own annihilation as a heroic act of resistance.

Héloïse understands that even as a spirit in the shadowland Eurydice wanted to determine her own fate, preferring to die a second death than for her existence to be subject to the decisions of others. Marianne is haunted by the ghostly apparition of Héloïse even before her annihilation is secure and, like Orpheus, is called back on their final parting as she crosses the threshold of the house, turning to witness the disappearance of Héloïse.

Throughout the film the power of art structures and organises agency, as well as communicating emotion and memory. By reimagining Orpheus as Marianne, the searing, unbearable tragedy of the separated lovers is painfully felt; Marianne is left only with fragments of Héloïse, endlessly reproducing her portrait and seeking her image. The film ends with a final glimpse of Héloïse, alone at the theatre to hear Marianne’s favourite piece, the Allegro in Vivaldi’s Summer in the Four Seasons. Closeted in the convent, Héloïse had loved the austerity of the organ but had never heard an orchestra. Marianne describes the crescendo of the storm, the rolling, rising weather, the danger and power evoked by the music, but cannot reproduce it for her. On finally hearing the piece, Héloïse’s emotions rush dramatically with the music, and the bond between them is reaffirmed. This is the life that Héloïse wants, the rush, the crescendo of the storm, not the folding closed of her life, the quiet slipping backwards into oblivion, consigned by the thoughtless actions of another. Héloïse wants to choose roses as well as bread, and at least in this momentary consolation, in this music, she has them. 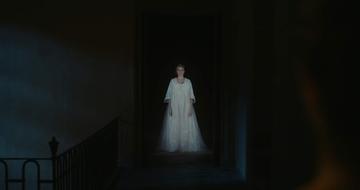 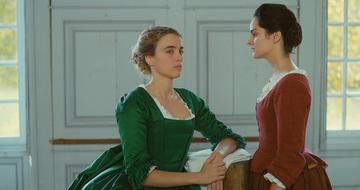 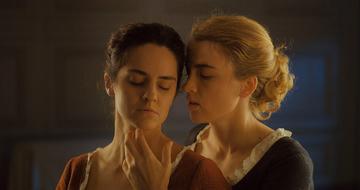 Portrait of a Lady on Fire, Lilies Films/ Pyramide Films, 2019