In Hilary term 2019, I was very fortunate to be one of the recipients of the Humanities Knowledge Exchange Fellowships for a new research project entitled, Women’s Suffrage and Colonialism: New Perspectives and Collaborations. This project operates in partnership with the National Trust and seeks to connect academic research on transnational women’s suffrage campaigns within the British Empire to collections, properties and people associated with the National Trust.

Having visited many National Trust properties over the years, I have experienced, first-hand, the ways in which the Trust has both protected and preserved their properties for present and future generations and also curated histories that are engaging and accessible. I was therefore incredibly excited when I discovered that both the National Trust Partnership and the TORCH Knowledge Exchange Fellowship would allow me the opportunity to collaborate with this national institution, and use my research skills to critically examine National Trust histories that may currently be unknown.

As a scholar of women’s suffrage, who  was immersed in the commemoration of the centenary of passing of the Representation of the People Act in 2018, the KE Fellowship offered me the opportunity to enhance and expand my existing research interests in women’s suffrage and political networks, whilst also supporting the National Trust in their aim to foster ongoing research linked to its 2018 Women and Power Programme. As the British women’s suffrage movement is often discussed as part of a broader feminist movement with women’s networks, interactions, and alliances moving beyond national boundaries, it seemed more pertinent than ever to explore the National Trust’s collections within a broader imperial context.

By prioritising women’s suffrage in the context of colonialism and using women’s transnational friendship and familial networks to identify the people and places that would become central to this project, preliminary research identified Dunham Massey, Wightwick Manor, Mount Stewart and Kedleston Hall as the project’s main case studies. Not only does it appear that the men and women who lived in these properties were deeply involved with suffrage and colonialism from a variety of standpoints, but it is also clear that their friendship and familial networks spanned across the British Empire. For example, research into the familial network of the Mander family of Wightwick Manor, illustrates that through the marriage of Alan Mander and Lionel (Miles) Mander to the daughters of the Maharajah of Cooch Behar, Sudhira and Pretwa, the Mander family was connected to the Indian campaign for enfranchisement during the 1920s and 30s. Sudhira and Prewa’s aunt, Mrinalini Sen (nee Luddhi), was heavily involved in suffrage agitation in London in 1919 and became a central figurehead for the women’s movement in Bengal during the 1920s.[i]

Clearly, transnational friendship and familial networks are crucial in tracing the ways in which National Trust properties and families were connected to the fight for women’s suffrage across the Empire, but this project must go further than that. By using the familial and friendship connections identified at the preliminary research stage, this project will move on to analyse property-centred collections in tandem with international suffrage periodicals such as Stri Dharma ( the official organ of the Women’s Indian Association) and Jus Suffragii (the official journal of the International Women’s Suffrage Alliance). In doing so, this fellowship will allow me to map interactions and exchanges between a number of National Trust properties and the international suffrage movement. Moreover, by exploring the role of race and colour in shaping women’s experience of the colonial suffrage movement, and also placing women’s suffrage in the context of imperial conversations and debates, this project will bring forward a range stories and histories that were previously unknown to the Trust. Diverse histories that will engage both National Trust staff and the general public. 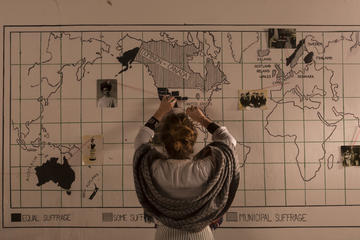