Literary Coteries and their Influence on Landscape Design, 1740 – 1760

The TORCH Heritage Programme brought together English Heritage and the Faculty of English Language and Literature to set up this collaborative doctoral award. This project is supervised jointly by Prof Christine Gerrard, of the University of Oxford, and Dr Andrew Hann, Properties Historians' Team Leader at English Heritage.

This collaborative DPhil project seeks to shed light on the connection between literary coteries and landscape design in the mid-eighteenth century. There are two aspects to this research: the first is to trace the symbiotic relationship between literary manuscripts and garden design; the second component to understand the wider cultural and intellectual networks that linked coteries and country house gardens.

For this reason, a core component of the research is visiting other country house gardens that were part of the Wrest ‘network’. This has opened up further collaborations with the National Trust, as we seek to share knowledge and open discussions about the shared influences across country houses, including sites such as Stowe, Shugborough, Wimpole, and Hagley. Considering the social, political, and intellectual networks that were prevalent in the mid-eighteenth century is key to unpicking the sometimes complex coded references in the gardens, or even understanding the intellectual context for many features in the landscape. In addition, understanding the poetry of the time as a means of interpreting the landscape offers another insight into the imaginative and associative ways in which visitors regarded gardens.

The main focus of this project, however, is the Wrest circle, or ‘Wrestiana,’ as the group later became known. The set hinged on a young intellectual couple, Jemima Marchioness Grey and Philip Yorke (Lord Royston, later 2nd Earl of Hardwicke), and were most active from 1740 to around 1760. Surprisingly, the couple’s union had been arranged – largely because Jemima’s grandfather, Henry 1st Duke of Kent, had spent a considerable fortune on the gardens at Wrest (over £20 million in today’s money), and was keen to restore the family finances by joining forces with the wealthy Lord Chancellor, Philip Yorke, 1st Earl of Hardwicke. Nevertheless, both Philip and Jemima had been studious as children and shared many interests in the classics, history, literature, and gardens. It was no surprise that they would gather their close friends together at Wrest Park, and from there, a literary circle would form.

The coterie was largely drawn from Jemima and Philip’s close friends and family: Mary Gregory (née Grey), Elizabeth Anson (née Yorke), Charles Yorke, and John Lawry, as well as the antiquarian Daniel Wray, the London editor Thomas Birch, the bluestocking Catherine Talbot, and later, the garden architect and poet, Thomas Edwards. The coterie’s manuscript, Wrestiana (1742-1770), offers insights into the mock seriousness and precocious wit of the group. Their compositions range from fantastical mock-heroic romances, meetings in Elysium with their Whig ancestors, a Homeric ode to John Lawry’s broken carriage, and satires on London booksellers. In addition, the privately printed Athenian Letters (1740-1743) that Philip wrote alongside his tutors at Cambridge would inform the creation of the Mithraic Glade at Wrest Park.

The coterie was certainly exclusive, and efforts were made to keep it that way. Thomas Edwards would write a letter to Daniel Wray in which he would rather snidely remark that another poet, Richard Owen Cambridge, was ambitious to ‘get into the Wrestiana.’ Given that Owen Cambridge’s poems do not enter the manuscript of Wrestiana until the 1770s, we can conclude he was on the waiting list for a long time, and only then, once the original group had begun to disband. Equally, William Warburton, the infamous and somewhat ridiculed editor of Alexander Pope’s works, was a close friend of Charles Yorke and was keen to obtain a copy of the Athenian Letters ‘under the usual restrictions.’ Nevertheless, even Charles noted that Warburton was ‘on no account to be entrusted with a copy… owing to the friendly impetuosity of that man in particular.’

At the same time, however, the Wrest coterie was also connected to significant cultural, literary, and political networks. These connections provide some sense of how far the group was well-connected and in some way influenced by other sources.

George Lord Lyttelton, for instance, not only a close political ally of the Lord Chancellor, but he was both a source of literary inspiration having written his own Persian Letters in 1737, and perhaps above all, a source of  horticultural inspiration. He would help Jemima and Philip to find a suitable location at Wrest Park for their Mithraic Altar and Root-house, and Jemima would remark that ‘his opinion has great weight with me, as One not only used to Stow & a more charming Place (I believe) of his own, but whose Taste is very elegant.’ When she did actually visit Hagley in 1763, she would describe the gardens there as ‘Poetry & Painting.’ Philip’s father, the Lord Chancellor, would borrow ideas from Hagley, to the extent that Lyttelton actually had to write to Sanderson Miller to dissuade him from creating an exact copy of his Gothic Castle at Wimpole.

The novelist Samuel Richardson was also known to the group, personally presenting Philip and Jemima with a copy of Clarissa at their London residence in St. James’s Square. Thomas Edwards and Catherine Talbot would also become personal correspondents of Richardson, to the extent that they would even make comments on his drafts of Sir Charles Grandison. In addition, the name Alexander Pope continues to creep into the group’s letters, whether through Warburton’s boastful descriptions of his acquaintance with the celebrated poet, Edwards’s apparently unsuccessful attempt to curry favour by delivering stones for his Grotto in Twickenham, or even Edwards borrows Pope’s recipe for cement to build the hermitage at Wrest.

Scope of the project

Having a greater understanding of these mid-eighteenth cultural networks will help to trace how far country house gardens are the product of shared social, literary, and intellectual networks. While landscapes did conform to tastes and fashions of the day, as country house visiting became a popular pastime, gardens became increasingly public spaces. As a result, country houses came to embody a tension: both places of private retreat for their owners, while also becoming tourist attractions for the general public. One means of withholding meaning from visitors was to create coded references within the landscape; it is perhaps not incidental that the Mithraic Altar at Wrest alluded to the coterie’s private works and would therefore not be understood by most visitors. This research will examine this tension and tease out the ways in which coteries were able to create their own intellectual games through the landscape design itself.

Following an archaeological dig to discover the secrets of the Root House that once sat in the mysterious Mithraic Glade of Wrest Park in Bedfordshire, listen to Episode 45 of the English Heritage Podcasts with Dr Andrew Hann and Jemima Hubberstey to discover why the glade was created and the literary inspiration behind it. They reveal what the Root House was, how it was used, and its unique connection to the story of this spectacular estate.

Jemima is a DPhil Candidate in English Language and Literature, working on the Collaborative Doctoral Award ‘The Wrest Circle: Literary Coteries and their Impact on Landscape Design, 1740-1760’. She tweets as @CoffeeBookGirl. 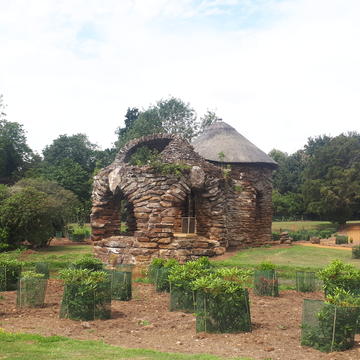 The Bath House at Wrest Park, designed by Edward Stephens in 1770. Photograph by Jemima Hubberstey.