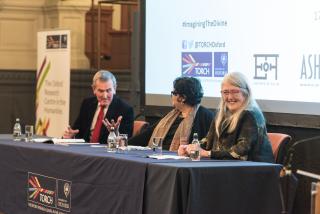 On Wednesday evening, thirteen Year 12 students gathered outside the Sheldonian Theatre ready to hear renowned Classics Professor Mary Beard in conversation with Dr Neil MacGregor on the topic of "Imagining the Divine". The Ashmolean is currently showing an exhibition of images of divinity in the major world religions, and this was the springboard for the discussion, chaired and introduced by the Ashmolean's Dr Mallica Kumbera Landrus.

Mary spoke about how religions have always used images as a way of representing the divine, and talked about how these images serve to bridge the cognitive gap between the human and the divine. She spoke of how, for example, the Hindu god Vishnu combined elements of animal, human and divine, and how there was not necessarily a distinction between these different planes of existence.

Neil talked about some of his earliest experiences of religious imagery, such as illustrations in Bibles for children, and also talked about religions where representing the divine as an image is against the practice of the religion - he cited later Judaism as an example.

Mary spoke of the statue of Athena at the Parthenon as one attempt to construct the divine - she explained its huge size and how it would originally have been dazzlingly bright and decorated. She also spoke of more subtle ways of representing the divine - how someone might in a story encounter an old woman who needed to cross a bridge, but her smell was beautiful and her body was light, so the person who encountered her would have known it to have been, say, the goddess Venus.

Mary and Neil talked about some of the aspects of representing the divine which exhibitions can miss - Neil talked of how one would have been able to know where temples were in ancient times by their smell from the burning of animals and the blood. Representations such as "blobs" and "planks" were not so comfortable and appealing for a museum exhibition, but were just as valid as ways of seeking to depict a deity.

Mary expressed that ancient Greek and Roman religion, and in fact all religions, could seem a bit "bonkers" in their attempts to bridge the gap between mortal and divine, and to convey what is in fact perhaps inexpressible and fundamentally mysterious.

The talk ended with some interesting questions from the audience, including exploring musical representations of the divine, such as chanting and hymns. The final questioner pointed out that the exhibition had omitted to include any female representations of divinity.

Niamh Duncan, Year 12 Latinist, said: "the talk was really interesting - it was fascinating to understand more about the importance of images in religion".

We are very grateful to the University of Oxford's Humanities Division for generously giving us tickets for this fascinating experience.