You don’t miss it till it’s gone: theology in a time of crisis

Everything has changed so quickly. Given the speed of our transition to a new way of life, it seems painfully premature to be offering any sort of wider analysis. Asking what we might learn from this crisis is just not the important question right now. People need healthcare, food, financial support, and reassurance. Yet the academic impulse is always to enquire about the wider significance of any given phenomenon. This is perhaps especially true for theologians, many of whom deal with weighty existential questions on a day-to-day basis. So, in such a time of crisis, what is it that theologians should be doing?

Firstly, and most importantly, there are a slew of practical questions that need answering. How can religious communities find ways to worship together and support one another whilst remaining physically distant? What can be done to help the most vulnerable in our society—the elderly, the poverty-stricken, and the homeless—who will inevitably find the coming months hardest? And how do we safeguard mental wellbeing at such a disturbing time?

Faith groups have been quick to volunteer their time and energy to meet some of these pressing, practical needs. Networks of supporters have been set up in local communities; regular appeals are being made to continue to support the work of food banks; and many are sharing helpful resources of activities to pursue in isolation.

But there are also new questions to be broached that are more distinctly theological in character. For example, what does the sudden surge in digital forms of interaction mean for our understanding of ourselves and the world? Within Christianity, disagreements have already surfaced as to whether it is possible to partake in the eucharist remotely. Some have argued that congregations should participate via spiritual communion alone. Others hold that the materiality of the eucharist must be central to a faith that is based on the concept of incarnation—and wonder whether it might be possible to receive the eucharist via new forms of mediation. What such debates reveal, I think, are the different assumptions that people have been taking for granted and are only now exposed in this unprecedented time of crisis.

But I wonder, as a Christian theologian, if there is something deeper that we should all be paying attention to as this crisis continues to unfold, something deeper that might be revealed. What is it that we value most of all? In a time of anxiety and constraint, what is it that we are most distressed to have lost? Perhaps the chance to hug a loved one; to visit a friend; or, for some, to receive communion. At the same time, what are we relieved that we are still able to do? Maybe, reading a book; observing the signs of spring; or performing acts of service for others. It’s a well-worn cliché, but we often only miss things when they’ve gone. Times of crisis such as this seem to provide an opportune moment to reassess what we hold most dear.

Yet, even if we do—in all this chaos—begin to see more clearly what we want to be valuing, how do we—both now and in the future—live according to those values? This is a truly pressing question, not just for theologians, but also for philosophers, psychologists, and behavioural scientists. Why is it that, in ‘normal’ life, we so often fail to put our values into practice? What sort of cognitive dissonance prevents us from taking right actions? Because it is the same conundrum that we face with the climate crisis: working out what we value and learning to live by what we find.

In 2015, Pope Francis published an encyclical letter on our ecological catastrophe called Laudato Si’ (Praise Be). The title, taken from Saint Francis of Assisi, expresses the pope’s contention that our starting point should be to recognise all that we find valuable about the world, and to express our gratitude for this state of affairs. He goes on to suggest that what we should be cultivating, as ecologically concerned citizens, are a set of ‘ecological virtues’—statements of what we value that we hope to be able to live by. This is no panacea for our current problems: people of faith have long struggled to practice the virtues they preach. But a clear idea of what we value is at least a place to start.

On some levels, the current pandemic is—bizarrely and almost distressingly—beneficial to the health of our ecosphere: from the drop in atmospheric nitrogen dioxide to the sound of birdsong in Wuhan. But, at the same time, we are acutely aware that the coronavirus outbreak is only an accelerated foretaste of the future crises to come. So, with such dire forecasts in mind, what are the values we wish to promote? What health-conscious and ecological virtues do we want to foster?

I really have no idea what we will learn from our current crisis, still less what it might ultimately ‘mean’. But I would encourage us to pay attention to what we are valuing—both explicitly and implicitly—as we try to live well in such unprecedented times. It is often only when things have gone that we realise how much we miss them. 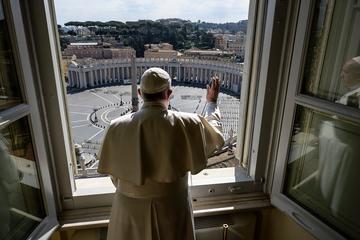