Zoe (like Chloe and Daphne) was a simple noun before it became a name; it is the ordinary Greek word for ‘life’.  As a name in antiquity it is rare in Greece itself (just 18 attested uses), rather commoner in the Greek diaspora.  The earliest date given in LGPN is ‘c. 51-62 A.D.’ for an example from Pompeii (the town’s terrible fate has its uses for chronology), and I find nothing earlier elsewhere.

There are two theories about how the simple noun became a name.  The first just takes it as an example of an abstract noun used as a name, like Sophia, ‘wisdom’ (featured earlier in this series, with some other examples).  The other is more interesting.  In Genesis 3.20 we are told that 'Adam called (his wife) ḥavāh, because she was the mother of all that lives (kol-ḥāy)': the author treats ḥavāh, the name, as deriving from ḥāy, ‘living thing, life’.  The translators of the Hebrew Bible into Greek (the Septuagint) accordingly in that passage rendered ḥavāh as Zoe (Ζωή), thus transferring the supposed derivation of the name into Greek.

At the moment these two possibilities just co-exist in the literature; nobody to my knowledge has confronted them.  If I must choose, I go, tentatively and regretfully, for the former.  Chronology works against the latter.  Whenever precisely the Septuagint translation of Genesis was done (I lack access to the scholarship on this point: but surely not later than the first c. BCE, doubtless much earlier), there was an appreciable gap between it and the first attestation of Zoe as a name in any other context.  Even within the Septuagint, in later passages where Eve is mentioned her name is just transliterated from the Hebrew as Eva; so the new name Zoe appeared in just one place. Jerome, whose Latin translation of the Bible was canonical in the Middle Ages, went back to the Hebrew and called Adam’s wife Hava even in Genesis 3. 20.  And so it was the sin of Eve, not of Zoe, that brought all that woe into our world.

A Zoe was martyred under Diocletian and is recognised as a saint both in the Catholic and Orthodox churches; there was a Byzantine empress Zoe Porphyrogenita (see illustration).  But Zoe’s cult did not enter this country and so the name did not either until the 19th c. According to the excellent E.G. Withycombe ‘the earliest example noted’ (who by?) ‘is Zoe Skene, daughter of a British consul general at Aleppo, who married the future Archbishop Thomson’. Wiki tells me that Zoe Skene’s father, James Henry Skene, lived in Greece before his service in Aleppo and married a sister of A. Rhangabé, an eminent early epigraphist and politician.  So Zoe entered the British name stock from Greece.  But can this one use of the name, even if the bearer married an archbishop, underly the great popularity it achieved in the 20th c.?  More research would be needed into the name’s fortunes between Zoe Skene’s marriage to the Archbishop in 1855 and the period (the 1970s?) when it suddenly became ubiquitous. 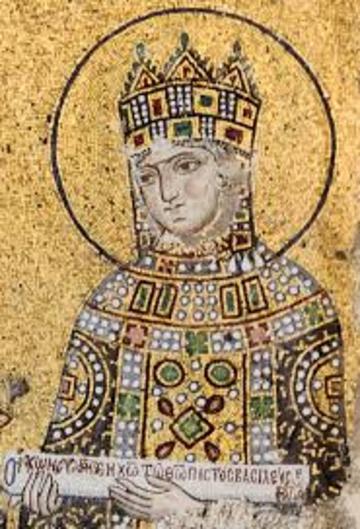