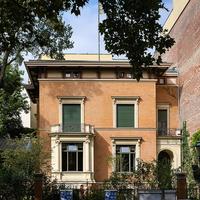 'Berlin through the Eyes of British Writers'

The popular image of early twentieth-century Berlin has been shaped by Christopher Isherwood’s novels and their adaptation in the musical film Cabaret. But Isherwood was only one of many British writers who become fascinated by Berlin in this period in which the old Prussian capital transformed itself into a world city and became a magnet for artist and writers from across the globe.

Stefano Evangelista has worked extensively on international literary relations and his monograph on literary cosmopolitanism, Citizens of Nowhere, is due to come out with OUP in 2021. He has now partnered with the Literaturhaus-Berlin to investigate British literary responses to Berlin in the early twentieth century and their lasting legacy on the city’s culture. Together with Gesa Stedman of the Centre for British Studies and the Bodleian Library, they are planning an exhibition that examines how Berlin features in British writers’ published works, letters and diaries, from the turn of the twentieth century till the onset of the Nazi regime.

Scheduled for summer 2021, our exhibition aims to reconstruct a complex, granular picture that includes positive responses to the city as well as reactions of scepticism and revulsion. It will bring to light British writers’ fascination with Weimar cinema, their involvement in psychoanalytic circles, and their taste of the pleasures of Berlin’s famous bohemian scene. We will guide viewers through a series of places that became charged with a special, symbolic significance, including the Romanisches Café, Magnus Hirschfeld’s Institute for Sexual Science, the Eldorado Cabaret, and the seedy Cosy Corner bar made famous by Isherwood.

The exhibition will be accompanied by an illustrated book and it will feature a series of readings and events with academic experts and writers, including British writers currently resident in Berlin, in which we will discuss how this key moment in the early twentieth century continues to affect literary responses to the city today.