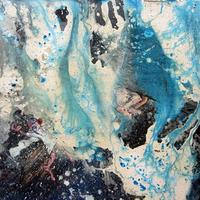 This is a collaborative artistic project inspired by Spenser's Faerie Queene, perhaps the greatest single poem of the English Renaissance. It tells the story of an attempt to build a world in the image of the poem.

Demons Land was the brainchild of a Romantic called the Collector. His was a rapturously literal vision of poetry and history. His society would be structured by repeating rhymes, rhythms, and stanzas. A few ruling virtues would establish the pattern for life. He would succeed where Spenser did not: he would complete the unfinished poem, and the project of reformation that it served. Spenser's Ireland was a savage mess; Demons Land would be a civilized work of art.

The poem did indeed come true - but not as the Collector imagined. The energies of its world overwhelmed the Collector's demand for discipline. Demons Land repeated the tale of Ireland, and Van Diemen's Land, and of every other doomed project of colonization and cleansing.

The history of Demons Land will be told in both a book and a multi-media exhibition, curated by a fictional contemporary woman called Ola. The story only came to light when Ola discovered a tranche of the Collector's paintings and manuscripts. She is not a dispassionate historian. She is trying to re-possess her past at the same time as recovering this larger history. To do this she makes three films: Justice, Holiness and Chastity. These films are her attempt to fill in the gaps of the historical record and to bring the poem truly to life.

The result is a work that uses different media and materials - film, drama, painting, puppets, soundscapes, music - which both independently and symbiotically attempt to embody a poetic vision. As well as a digital version, the installation will be exhibited at various locations in Oxford, London, Sydney, Brisbane, Perth, and initially in the temples and grottoes of the Stowe National Trust gardens.