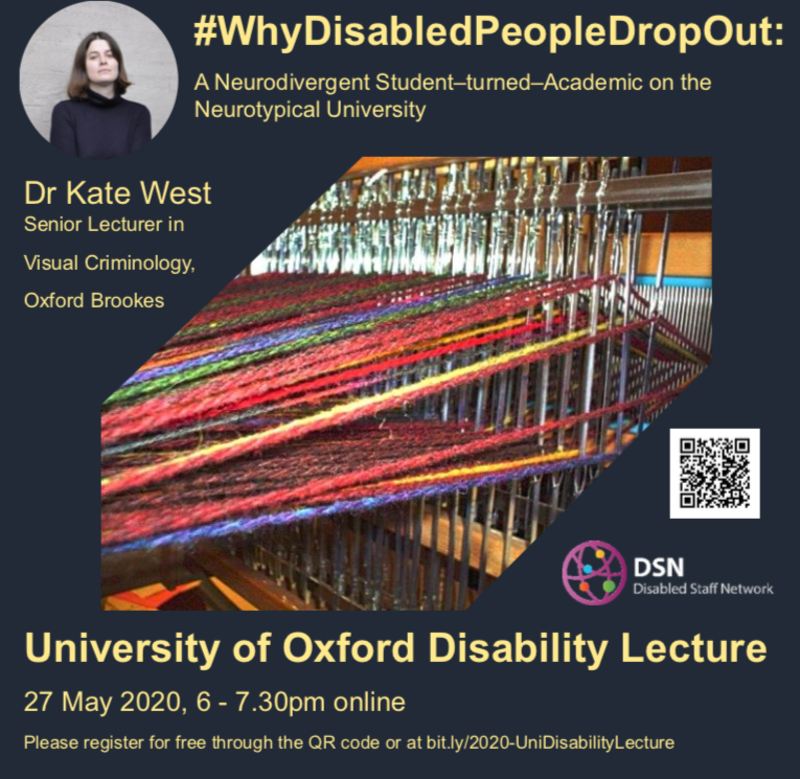 #WhyDisabledPeopleDropOut: As a neurodivergent student-turned-academic, Dr Kate West reflects on her experiences in the neurotypical university

Dr Kate West is a neurodivergent (autistic and dyslexic) Senior Lecturer in Visual Criminology at Oxford Brookes University. Kate is a graduate of the Universities of Oxford (MSc DPhil) and Edinburgh (LLB). She researches crime's late modern art history and visual culture. Kate’s first book, What Was Criminology?: An Unlikely Art History, recovers the lost role of fine art in nineteenth-century criminology. She is also conducting a second book project based on her blog and podcast, Dyslexic Academic. In this talk, Kate uses the social model of disability to think about the neurotypical university’s structural disablism, that is the systemic ways in which a university designed for neurotypicals disables neurodivergent students and academics. Borrowing the viral hashtag, #WhyDisabledPeopleDropOut, created by queer and deaf activist and student Christine Marshall, Kate discusses one of the neurotypical university's most profound and still too-common disabling effects, 'dropping out'.

Professor Louise Richardson - Vice-Chancellor at the University of Oxford