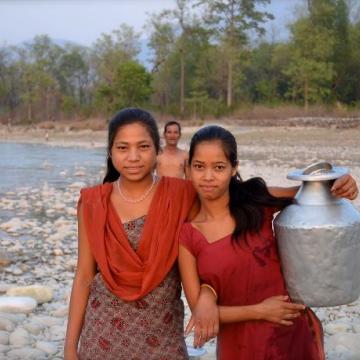 A graduate conference exchange project supported by The Oxford Research Centre in the Humanities (TORCH), Merton College (University of Oxford), Cornell’s Institute for European Studies and the Brettschneider Fund

Organised by postgraduates Cayenna Ponchione (Music), with Jessica Thorn (biodiversity Institute)  and Benedict Morrison (English/Film), this collaborative conference project had its roots in the interdisciplinary conference competition sponsored by TORCH in December 2013.

What and where is the art and environmental science nexus and how is it relevant? In what way can we leverage these diverse ways of knowing and engaging to cooperatively address the water crisis?

Technological solutions to the global water-crisis tend to outpace the mechanisms for change in the political and cultural spheres; interdisciplinary work can achieve culturally sensitive solutions. The Oxford Water Network, and the Mediterranean Initiative of the Cornell Institute for European Studies, have fostered interdisciplinary approaches to water scarcity concerns. But arts practitioners and researchers seldom engage in direct dialogue with environmental and social scientists. Holistic approaches to water-scarcity issues that synthesize cultural and scientific understandings are essential if solutions are to be sustainable. The organizers of the project believe that the humanities, by drawing attention to the cultural voices of specific areas affected by water scarcity, can make a significant contribution to these solutions.

Twelve students at Oxford and Cornell Universities in faculties of the arts, environmental sciences, and engineering were placed in teams to work on creative collaborative projects over the course of several months. The teams presented their work-in-progress at a conference on the 30th of June in Oxford and their final projects will be presented on the 7th and 8th of November at this conference at Cornell University.  Practitioners and researchers in the fine arts, poetry, photography, music composition and performance have collaborated with environmental science and engineering colleagues to explore and present their work on key areas of water scarcity in sectors such as agricultural food production, industry or local management and use.

On 30 June, Oxford hosted the first leg of ‘Art, Science and the Thirsty World’, an international conference run in conjunction with Cornell University. The conference explored the possibilities for productive cooperation between the humanities and sciences in their response to the crisis in water scarcity affecting many regions of the world. Reports were heard from five creative partnerships, each representing collaboration between Oxford and Cornell, art and science. These included: a musical composition informed by London’s clogged subterranean waterways; site-specific visual art responding to nitrogen pollution; poetry inspired by devastating water shortage in Nepal and Ghana; and an experimental literary text highlighting the difficulties in communication between artists and scientists. In addition, expert voices from Cornell and Oxford spoke on the situation in the Middle East, Africa and southern Europe. The day was not only a thought-provoking contribution to the important discussion surrounding art-science collaborations, but also an exciting prelude to the second leg of the conference, to be held at Cornell in November. Guest speakers included: Dr Gail Holst-Warhaft, Dr Katrina Charles, Dr Francesca de Châtel, Sigrid Holmwood and Dr Daniel Grimley (biographies below).

Upcoming! Conference participants from Oxford will travel to Cornell to meet with collaborators and present their finished work. A concert on 7 November, featuring some of the performance based collaborations as well as well-loved water-inspired pieces of the repertoire from the past will kick off the conference. Premiere performances of compositions by Oxford graduate composers Solfa Carlile and Toby Young will be highlighted. The conference will run from 9am-5pm on the 8th of November in the Music Department at Cornell University. Panelist and guest speakers will include Roald Hoffmann, Jonathan Culler, Gail Holst-Warhaft, Barbara Mink, Tammo Steenhuis, Ben Altman, Christine Destrempes, & Joni Doherty.

Art, Science and the Thirsty World is sponsored by The Brettschneider Fund, the Atkinson Center for a Sustainable Future (Cornell University), TORCH, and the Cornell University Music Department.

Dr Gail Holst-Warhaft was born in Australia. In addition to being a poet she has been a journalist, broadcaster, writer, academic, musician, and translator. In the late 1970’s, while conducting research on Greek music, she performed as a keyboard-player with three of Greece’s leading composers, including Mikis Theodorakis. Among her many publications are Road to Rembetika (1975, 4th edition 2006.Translated into Greek, French, Turkish, German and Hebrew), Theodorakis: Myth and Politics in Modern Greek Music (Hakkert, Amsterdam, 1980), Dangerous Voices: Women’s Laments and Greek Literature ( Routledge, 1992), The Cue for Passion: Grief and its Political Uses (Harvard U.P., 2000), I Had Three Lives: Selected Poems of Mikis Theodorakis (2005), and Penelope’s Confession (poems, 2007), Losing Paradise: the water crisis in the Mediterrean (2010). In 2014, together with Francesca De Chatel and Tammo Steenhuis, she will publish a new volume about water issues in the Middle East and Mediterranean. Holst-Warhaft directs a program in Mediterranean Studies at Cornell’s Einaudi Center for International Studies. For the last five years she has been conducting research and teaching courses on problems of fresh water, especially in the Mediterranean region. With hydrologist Tammo Steenhuis and Cornell graduate students, she has been working on issues of water scarcity in the eastern part of Crete. She has also worked in local schools, and in partnership with Cayenna Ponchione, she has been involved in two Oxford-Cornell projects linking water research with the arts. Holst-Warhaft is an adjunct Professor of Comparative Literature and Biological and Environmental Engineering at Cornell University and was recently elected to the graduate field of Music.

Dr Katrina Charles is a lecturer in the School of Geography and the Environment at Oxford, and is the director for the MSc in Water Science, Policy and Management. From an environmental engineering background, her current work uses a multidisciplinary perspective to assess the barriers and catalysts to sanitation access in informal settlements in East Africa. Throughout her career she has worked on issues related to water and sanitation: public health, environmental fate and transport of pathogens, impacts of climate change, and the role of communication in improving access to safe water and adequate sanitation.

Dr Francesca de Châtel is a journalist, editor and author specialising in water issues in the Arab world and Mediterranean region. Her recent work focuses on water management in Syria. Francesca previously worked as the editor of Revolve Water, a regional platform she created in 2011 as part of Revolve Magazine to raise awareness of water issues in the Mediterranean region.  Between 2006 and 2010, Francesca lived in the Syrian capital Damascus where she was the editor-in-chief of Syria Today, the first independent English-language current affairs magazine in the country. During this period, she also carried out extensive research into water management and drought in Syria. She is the author of Water Sheikhs and Dam Builders, Stories of People and Water in the Middle East (Transaction Publishers/Rutgers University Press, 2007), a non-fiction book and travelogue about the history, culture and politics of water in Middle East and North Africa (MENA). Francesca holds a PhD from Radboud University in Nijmegen, The Netherlands. Her doctoral thesis, Vanishing Water Landscapes in the Middle East: Public Perceptions, Political Narratives and Traditional Beliefs Surrounding Water and Scarcity in an Arid Region examines the influence of religious, technological and political narratives on socio-cultural attitudes to water in MENA.

Sigrid Holmwood is a half Swedish, half British artist based in London. Her practice is centred around her persona 'The Peasant Painter' through which she researches connections between painting and agriculture, and the figure of the peasant in relation to modernity. Recent solo exhibitions include 'A Peasant Painter's Garden', ASC Gallery, London (2014); Sigrid Holmwood at Hallands Art Museum, Halmstad, Sweden (2013), 'Painted Performances' at Upton House National Trust (2012), 'Journey to WuMu' at Annely Juda Fine Art, London (2012) and Vitamin Creative Space/The Pavilion, Beijing (2011). Group exhibitions include 'Detail' at H-project space, Bangkok, Thailand (2014); Stag: Berlin/London, Dispari and Disapri projects, Reggio Emilia, Italy (2013); 'Tatoo City', Castlefield Gallery, Manchester (2012); 'Passage', Blindarte Contemporanea, Naples (2012); and the Saatchi Gallery in Adelaide, at the Art Gallery of South Australia (2011). She is a visiting tutor at the Ruskin School of Art in Oxford. She is currently working on a project called 'Sistemas Efímeros' at Joya: Arte y Ecología in the mountains of the Sierra María los Vélez in Almería, Spain. It is an interdisciplinary project bring together geologists, landscape archaeologists, ecologists and artists to work on an abandoned water catchment system and seeks to bring a sense of value to the arid land.

Dr Daniel Grimley is a University Lecturer in Music at Oxford, and tutorial fellow at Merton College. His research is concerned principally with Music, Landscape, and Cultural Geography, with particular reference to Scandinavia and Finland (Grieg, Sibelius, Carl Nielsen) and early twentieth-century English music (Elgar, Vaughan Williams, and Delius). HIs books include Grieg: Music, Landscape and Norwegian Identity (Boydell, 2006), Carl Nielsen and the Idea of Modernism(Boydell, 2010), and Sibelius and his World (Princeton, 2011). He is Principal Investigator of the Leverhulme-funded network Hearing Landscape Critically, an associate editor of the Musical Quarterly (OUP), and one of the convenors of the interdisciplinary Environmental Humanities group at the Oxford Centre for Research in the Humanities (TORCH).