We present bite-size academic talks on heroes and villains 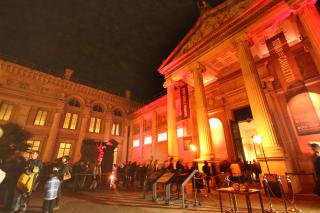 Are you a superhero or a supervillain? The Ashmolean Museum opens its doors for a night of action-packed adventure, exploring heroes and villains across cultures and through time. With blockbuster live performances, hands-on creative workshops, behind-the-scenes talks, and bars in the rooftop Dining Room and the Café. Discover your secret superpower at Oxford’s favourite cultural night out.

TORCH will be collaborating with the Ashmolean on a series of bite-size talks exploring the theme of heroes and villains in Ashmolean collections. A dozen TORCH academics will speak on a range of topics, including Game of Thrones, the Alfred Jewel, Greek Epic and Turner's High Street.

Tickets for this LiveFriday are on timed entry and cost between £5.75 and £8.25 including a booking fee. Please click here for more information and to book.

There will be a TORCH hotspots in the Baroque Art Gallery, as well as speakers on an object trail in galleries all around the museum. Please see below for details.

19.15 | Heroes and Villains in Game of Thrones, Dr Carolyne Larrington

19:45 | Intravenous anaesthesia on Turner's High Street, Dr Alessia Pannese
Alessia explores a painted documentation of a relatively little known event in Oxford local history: the first intravenous anaesthesia. The introduction of anaesthesia in medical practice is generally attributed to American dentist William Morton, who gave a public demonstration in Boston, Massachusetts, in 1846. However, recent research indicates that a crucial attempt was carried out by apothecary Robert Boyle in Oxford almost two centuries earlier.

20.15 | Great men and fallen heroes, Dr Jessica Goodman
In the late eighteenth century the French start rethinking what a hero is - it's not about wars and kings and soldiers any more, but people like writers and artists and scientists, who make a useful (and sometimes moral) contribution to the nation through means other than military glory. Jessica explores this shift and its influence on the creation of the Panthéon, which was a huge secular temple to house the bodies of these 'great men'.

20.45 | Valour, betrayal & desire: heroes & villains in Indian paintings, Nisha Somasundaram
This talk introduces the great male and female heroes in Indian epics and the demons they defeated using a mix of scholarly insights, mythical storytelling and exploration of symbolism through performance, movement and gestures.

21.15 | The Alfred Jewel and Kingship, Amy Faulkner
The Alfred Jewel is a testament to Alfred’s educational reforms, supposedly one of the mysterious and valuable aestels that would have accompanied the translations Alfred distributed to his bishops. This talk shows how Alfred’s translations question what it means to be a good king, and how the use or misuse of wealth is at the heart of this question.

21.45 | Live and Let Die - in Greek Epic, Dr Almut Fries
The Attic black-figured wine jug illustrates a crucial scene from The Illiad, a tale in which heroism and villainy merge. This talk will explain the iconography of the vase painting (including the symbolism of the animal skins Dolon and Diomedes are wearing) and locate it in Greek mythical history – Homer and beyond.

Object Trail - these talks take place throughout the evening across the Museum. Pick up a programme and explore the talks!

Dr Amber Gartrell | The Marble Sarcophagus panel depicting the Hunt for the Calydonian Boar
This talk will explore some of the key aspects of the iconography and mythology of the Dioscuri, suggesting how they differed from other heroes and exploring why they became gods. Using as an example their depiction on a Roman sarcophagus panel displayed in the Ashmolean museum, Amber will also suggest why their story continued to resonate into the Roman imperial period.

Helena Kaznowska | The Presumed Portrait of William Shakespeare (c. 1830)
Take part in our fun and exciting way to learn about the greatest heroes and villains in Renaissance plays! In this custom-made game of Top Trumps, explore the theatrical worlds of Shakespeare, Marlowe, Jonson and some lesser-known playwrights of the time, from Thomas Heywood to Aphra Behn.

William Brockbank | The Alfred Jewel
William will discuss how Alfred justified and legitimised his kingship within the context of the extensive literary output from his court.

Dr Beth Steiner | Weld-Blundell Prism (the Sumerian King list)
Beth's talk will explore the epic of Gilgamesh, a character who encompasses both hero and villain in his leadership, friendship, defeat of monsters and search for deeper meaning.

The Alfred Jewel and Kingship

Heroes and Villains in Game of Thrones