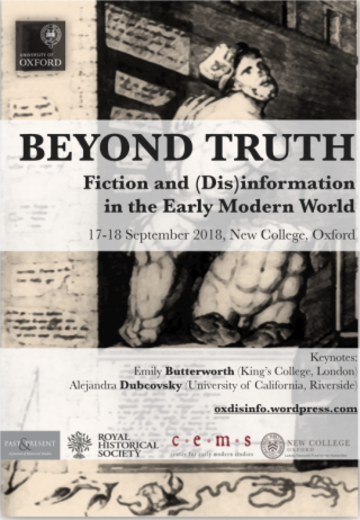 ‘Fake news’ is nothing new. Early modern scholarship has long since done away with the idea that the invention of print led to an unambiguously positive revolution in the circulation of information. Attention has been drawn to the way the press – along with improvements in transport, roads and postal services – facilitated the spread of rumours and falsehood. On the other hand, scholars working on utopian writing and the invention of new fictional forms have pointed to the provocative blurring of fact and fiction in early modern philosophy and literature. Indeed, the very classification of different kinds of information as ‘factual’, ‘fictional’, ‘news’, ‘gossip’ or ‘lies’, has been problematized by historians and literary critics studying the power dynamics inherent to any such judgements.

This conference will explore the boundaries between truth and falsehood in the early modern period, thinking about disinformation, fiction, and power in tandem. The nature of the global is a crucial dimension of early modern uses of fiction and (dis)information, and therefore we seek to explore this topic from the perspective of the ‘early modern world’ rather than merely from Europe. By drawing together scholars working across regional, linguistic and disciplinary specialisms, we will call into question the idea of ‘fake news’ as a uniquely modern phenomenon, while bringing fresh perspectives to classic debates on the evolution of news networks, the development of fictional forms and the origin of the public sphere in the early modern world. By doing so, we will provide a forum in which scholars from different disciplines and backgrounds can share tools, methods and perspectives connected to the political, social and cultural history of disinformation.

4.00 Session III (chair: Giuseppe Marcocci, Oxford)
Fabrications of Race and Religion
Nora Galland (Paul Valéry-Montpellier 3) The Discourse of Race from the Middle Ages to the Early Modern Period in England: A Fallacious Tale of Identity and Alterity
Alejandro Enriquez (Illinois State) Franciscan Fake News at the Margins of Empire: Maya Ritual Murder Propaganda and Blood Libel in the 1562 Idolatry Trials in Colonial Yucatan

5.15 Session IV (chair: TBC)
Fiction and Deceit in Travel Accounts
Emily Teo (Free University of Berlin & Kent) Hyperbole and Deceit in Early Modern Missionary Accounts of China
Jessica Reuther (Ball State) ‘It is a Fable that the Negres Sell their Children’: Child Circulation and Parental Norms along the Slave Coast during the Early Modern Era

For biographical notes on our keynotes and speakers, paper abstracts, and information about the venue, please visit our website. Any questions should be directed to the organisers at oxdisinfo@gmail.com.

The price of a ticket includes the drinks reception at New College on the first day of the conference (Monday 17 September), and refreshments and lunch on both days. Space is limited, so please book if you would like to attend. Speakers and panel chairs are not required to register.

The event will feature twenty papers and two keynotes.