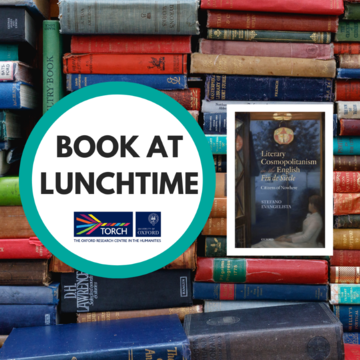 Join us for a TORCH Book at Lunchtime online webinar on Literary Cosmopolitanism in the English Fin de Siècle: Citizens of Nowhere by Dr Stefano Evangelista (English).

The fin de siècle witnessed an extensive and heated debate about cosmopolitanism, which transformed readers' attitudes towards national identity, foreign literatures, translation, and the idea of world literature. Focussing on literature written in English, Literary Cosmopolitanism in the English Fin de Siècle offers a critical examination of cosmopolitanism as a distinctive feature of the literary modernity of this important period of transition. No longer conceived purely as an abstract philosophical ideal, cosmopolitanism—or world citizenship—informed the actual, living practices of authors and readers who sought new ways of relating local and global identities in an increasingly interconnected world. The book presents literary cosmopolitanism as a field of debate and controversy. While some writers and readers embraced the creative, imaginative, emotional, and political potentials of world citizenship, hostile critics denounced it as a politically and morally suspect ideal, and stressed instead the responsibilities of literature towards the nation. In this age of empire and rising nationalism, world citizenship came to enshrine a paradox: it simultaneously connoted positions of privilege and marginality, connectivity and non-belonging.

Chapters on Oscar Wilde, Lafcadio Hearn, George Egerton, the periodical press, and artificial languages bring to light the variety of literary responses to the idea of world citizenship that proliferated at the turn of the twentieth century. The book interrogates cosmopolitanism as a liberal ideology that celebrates human diversity and as a social identity linked to worldliness; it investigates its effect on gender, ethics, and the emotions. It presents the literature of the fin de siècle as a dynamic space of exchange and mediation, and argues that our own approach to literary studies should become less national in focus.

Dr Stefano Evangelista is Associate Professor of English and Tutorial Fellow at Trinity College, Oxford. His research explores the links between English literature and other languages, classical antiquity, visual culture and the history of sexuality, particularly in the second half of the nineteenth century and the first half of the twentieth. His recent project, Happy in Berlin?, examined how Berlin featured in the works of British writers’ through a series of exhibitions.