Book at Lunchtime: The Oxford Handbook of Dante 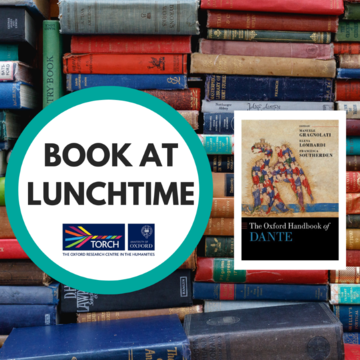 Join us for a TORCH Book at Lunchtime online event on The Oxford Handbook of Dante, edited by Professor Manuele Gragnolati, Professor Elena Lombardi and Professor Francesca Southerden.

The Oxford Handbook of Dante contains forty-four specially written chapters that provide a thorough and creative reading of Dante's oeuvre. It gathers an intergenerational and international team of scholars encompassing diverse approaches from the fields of Anglo-American, Italian, and continental scholarship and spanning several disciplines: philology, material culture, history, religion, art history, visual studies, theory from the classical to the contemporary, queer, post- and de-colonial, and feminist studies.

It seeks to challenge the Commedia-centric approach (the conviction that notwithstanding its many contradictions, Dante's works move towards the great reservoir of poetry and ideas that is the Commedia), in order to bring to light a non-teleological way in which these works relate amongst themselves. Plurality and the openness of interpretation appear as Dante's very mark, coexisting with the attempt to create an all-encompassing mastership. The Handbook suggests what is exciting about Dante now and indicate where Dante scholarship is going, or can go, in a global context.

Professor Elena Lombardi (Modern Languages) is Professor of Italian Literature and the Paget Toynbee Fellow and Tutor in Italian Medieval Studies at Balliol College, Oxford. Her main areas of research are Dante and the Middle Ages, with other specialisms including ideas of the book in the Middle Ages, and the theme of intertextuality in the Renaissance epic-chivalric poem. She is the author of three books: The Syntax of Desire. Language and Love in Augustine, the Modistae, Dante (2007), The Wings of the Doves. Love and Desire in Dante and Medieval Culture (2012), and Imagining the Woman Reader in the Age of Dante (2018).

Professor Francesca Southerden (Modern Languages) is Associate Professor of Medieval Italian and a Tutorial Fellow at Somerville College, Oxford. Her research focuses on the relationship between language and desire in the works of Dante and Petrarch. Her current book project, Dante and Petrarch in the Garden of Language, argues that the garden and language are fundamentally relational spaces for these authors. Her broader research interests lie in the philosophy of language, critical theory, and the concept of lyric from the Middle Ages to the present day.

Dr Hannah Skoda (History) Fellow and Tutor in Medieval History at St John’s College, Oxford. Her research focuses on the social and cultural history of the later Middle Ages; constructions of deviance; nostalgia; and legalism in this period. Her first book, Medieval Violence: Physical Brutality in Northern France, 1270-1330, focused on popular violence in later medieval northern France, working on the interconnections between different forms of violence, as well as looking at legal and cultural constructions of 'deviance', and the role of emotions in provoking outbursts of brutality.