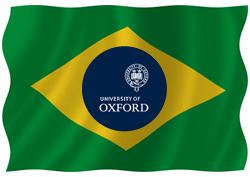 Thursday 22 January
5-6.50pm
Room 3, Taylorian Institute
Film: Basic Sanitation, dir. Jorge Furtado (2007), 112 minutes (English subtitles). Starring Fernanda Torres and Wagner Moura.
In this comedy, the people of the town of Linha Cristal in the south of Brazil need to sort out their sewage system, but the council has run out of money. The resourceful citizens discover a grant which is enough to fund their septic tank, but there is a catch: the money has to be used to make a film, and it can’t be a documentary. So they decide to make a science fiction film.

Friday 23 January
2-3pm, Room 3, Taylorian Institute
Talk: Cultural Mediation between Brazil and the UK – Misha Glenny and Silvia Salek
Misha Glenny is a journalist who has worked for The Guardian and the BBC, specializing in Central Europe, cybersecurity and global organized crime. In 2014 he made a series of radio programmes documenting ‘The Invention of Brazil’.
Silvia Salek is a Brazilian journalist based in London for over ten years. She is Head of BBC Brasil, which is part of the World Service, and has been collaborating with Oxford students doing their year abroad in Brazil.