Our Daily Byzantium: Medieval Heritage, Nation-building, and Politics in Serbia 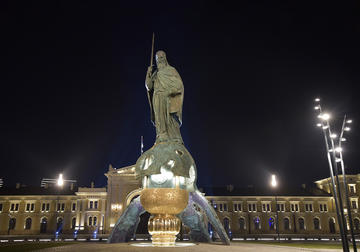 The scheduled event ‘Our Daily Byzantium: Medieval Heritage, Nation-building, and Politics in Serbia' brings together an international group of historians, art historians, and cultural theorists to discuss cultural heritage and nationalism in Serbia and the wider Balkans. Using the recent elevation of a colossal monument to Stefan Nemanja (a 12th century ruler of the medieval Serbian principality) in the centre of Belgrade as a discussion prompt, the panel will explore the 'national story' taking form in Serbia. By no means the exception in its use of medieval monuments and medieval characters to shape nationalist narratives, the current Serbian government has not only selectively invested in heritage conservation, but has also been actively constructing heritage monuments. There is a clear medievalism (or byzantinism) in the elevation of the church of St Sava or the new statue of Stefan Nemanja, one that seeks a direct link to an imagined medieval past to make new monuments appear ancient and remote. The panel will discuss these developments, as well as how medievalism and byzantinism developed historically and have been deployed as part of a modern political project, both in Serbia and the wider Balkans.

Dr Milan Vukašinović (University of Uppsala), Ink, Bronze, and the Blood of the Nation

Dr Milena Repajić (Faculty of Philosophy, Belgrade), The (not so) Subtle Messages of Monumental Stefan Nemanja: Medievalism and the Reshaping of Historical Memory in Post-Socialist Serbia

Tag #HeritagePolitics on Twitter to join the conversation on the day

Some short pre-readings to better understand the stakes of the debate:

Aleksandar Ignjatović, “ Affecting Consonance, Striving for Dominance: Scholarship and Politics at the Congresses of Byzantine Studies in the Balkans, 1924-1934 ”, Journal of Balkan and Near Eastern Studies 21/6, 2019, 696-715.

Diana Mishkova, “ The Afterlife of a Commonwealth: Narratives of Byzantium in the National Historiographies of Greece, Bulgaria, Serbia and Romania ” in Entangled Histories of the Balkans, Roumen Daskalov and Alexander Vaznekov (eds.), Brill, 2015, 118-274.

Marko Šuica, “ The Image of the Battle of Kosovo (1389) Today: a Historic Event, a Moral Pattern, or the Tool of Political Manipulation ”, in The Uses of the Middle Ages in Modern European States. History, Nationhood and the Search for Origins, Evans, R., Marchal, G. (eds), Basingstoke 2011, 152-174.

**For further reading and pedagogical resources, watch this space.