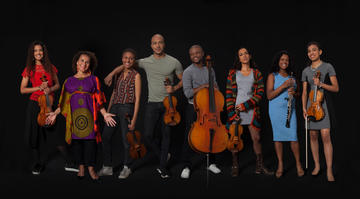 TORCH is delighted to host the first visit to Oxford by Chineke!

Entry to both the Q&A and the concert is free, and booking in advance is highly recommended. Please book via Eventbrite or email the TORCH team at torch@humanities.ox.ac.uk.

Founded in 2015 by the double bass player, Chi-chi Nwanoku OBE, Chineke! provides career opportunities for black and minority ethnic (BME) musicians. Chineke!'s mission is ‘championing change and celebrating diversity in classical music’ and it has achieved this through performances by the professional Chineke! Orchestra which comprises a majority of BME musicians, and the Chineke! Junior Orchestra for aspiring young BME players aged 11 to 22.

The musicians in the Chineke! Chamber Ensemble are all principal players of the Chineke! Orchestra and they bring a varied programme to the Oxford which, as in all their concerts, features works by BME composers alongside more familiar repertoire. The concert will be preceded by a talk and Q&A session with Chineke!'s founder and Artistic Director, Chi-chi Nwanoku OBE, in conversation with Dr Cayenna Ponchione-Bailey.

Chi-chi Nwanoku studied at the Royal Academy of Music and with Franco Petracchi in Rome. She is Professor at RAM and was made a Fellow there in 1998. Chi-chi is the Founder, Artistic and Executive Director of the Chineke! Foundation, which encourages diversity in the classical music industry through its two orchestras, the Chineke! Orchestra and Chineke! Junior Orchestra, as well as its educational and community engagement work. She created the ABO/RPS Salomon Prize, which celebrates ‘unsung heroes’ working in the ranks of British orchestras. In 2012 Barrie Gavin directed a documentary film about Chi-chi’s career, Tales from the Bass Line. She featured on BBC Radio 4 ‘Desert Island Discs in 2018. As a broadcaster Chi-chi has presented frequently for BBC Radio 3 & 4, BBC TV Proms Extra, BBC 2 TV Classical Star, BBC 4 TV series All Together Now, the Great Orchestra Challenge.

She was made an Honorary Fellow of Trinity Laban Conservatoire and Honorary Doctor of Music at Chichester University.

Chi-chi was awarded the OBE in 2017 for Services to Music.

Since 2016 Chi-chi has won Black British Business Awards, Person of the Year, ABO Award, which is awarded for ‘most important contribution to orchestral life of the UK’, top 10 of BBC Woman’s Hour, Women in Music Power List, inaugural Commonwealth Cultural Enterprise Award for Women in the Arts at Commonwealth Business Women’s Awards, Creative Industries Award at Variety Catherine Awards, featured in Royal Academy of Music exhibition Hitting the Right Note: Amazing Women of the Academy, voted to Powerlist of Britain’s 100 Most Influential Black People 2019.