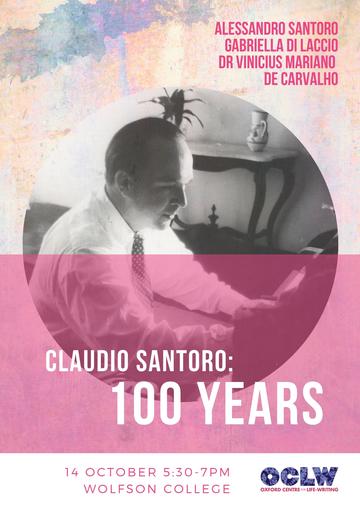 2019 marks the 100th anniversary of the Brazilian composer Claudio Santoro (1919-1989), one of the major figures in twentieth-century Brazilian music. His musical legacy includes nearly five hundred compositions. Among them there are fourteen symphonies, several chamber works, concertos, vocal compositions, one opera, film scores, and seventy-three known works for piano solo. Beginning with his very first compositions, his intense and extremely idealistic personality, always searching for new ideas and new musical expressions, led him to explore diverse idioms in his music. This unmissable lecture recital will be presented by the composer’ son Alessandro Santoro, acclaimed harpsichordist and pianist, Brazilian soprano Gabriella Di Laccio and Dr Vinicius Mariano de Carvalho, Lecturer in Brazilian Studies, King’s College London.
The concert will present some of Santoro Love Songs – an exquisite cycle written in partnership with Brazilian poet Vinicius de Moraes – as well some of Santoro’s piano preludes.

Alessandro Santoro
Born in Rio de Janeiro and master of piano by the Tchaikovsky Conservatory of Moscow in Elena Richter’s class, he recorded the No1 Piano Concerto of his father Claudio Santoro in the former USSR. He continued his studies with Jacques Ogg at the Royal Conservatory in The Hague, where he obtained a further Master’s degree and joined the faculty for five years. He performed with the Orchestra of the 18th Century and is founder of Den Haag Baroque Orchestra. He is regularly requested as a harpsichord teacher at festivals throughout Brazil. His discography comprises at the moment 20 CDs. The recording of Leclair’s Violin Sonatas with Luis O. Santos was awarded with the Diapason D’Or in 2005. At the 48th Brasilia Film Festival he received the musical direction prize for the documentary about his father. He is at the present harpsichord and continuo teacher at the EMESP in São Paulo. He is currently recording with Emmanuele Baldini the complete violin works of his father. Alessandro is responsible for the virtual and musical archive of Claudio Santoro.

Gabriella Di Laccio
Winner of the “ Air Europa Classical Act of the Year Award 2013”, lyric coloratura soprano Gabriella Di Laccio enjoys an international career that spans the genres of opera, oratorio and chamber music. Especially known for her virtuoso voice and much sought after in Baroque music she is also a devoted a performer of Contemporary repertoire. Equally at home on the recital stage, Gabriella performs regularly as a solo recitalist and as a member of various chamber groups and has appeared in a number of major London platforms including Wigmore Hall, Purcell Room, Southbank Centre, Megaron Opera House, St. John’s Smith Square, Banqueting House Whitehall, Théâtre des Variétés Mônaco. As a performer of the baroque repertoire she has sung with the Amaryllis Consort, Il Festino, Concerto IStrumentale, Di Profundis, Baroque Orchestra of Mercosur and Baroque Ensemble Florilegium, amongst others. In November 2018, she was listed as one of the BBC’s 100 most inspirational and influential women in the world. www.gabrielladilaccio.com.