Communicating Climate Change: How to engage the public 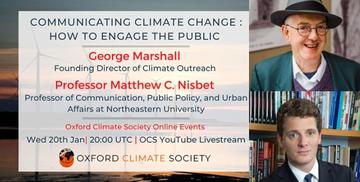 Climate change communication has been the subject of much research in the past decade. Despite a consensus among the scientific community on the existence and causes if not precise impacts of climate change, public engagement and political action on this issue have been weak. On the other hand, the hydrocarbon industry has invested much money and effort in perpetuating the idea that the anthropogenic nature of climate change is debatable turning scientific research into a matter of opinions and political positioning. As a result, 25 years after the IPCC second assessment which concluded that human activity was affecting the global climate, climate denialism remains an important part of political debate in the Anglosphere, in particular in the US and Australia.

To discuss these questions, we will be joined by two experts of the topic, George Marshall and Professor Matthew Nisbet.

George Marshall is the Founding Director of Climate Outreach, a British charity which leads the research on public engagement with climate change. Mr Marshall has 30 years of experience at all levels of communications and advocacy - from community level protest movements, to senior positions in Greenpeace and the Rainforest Foundation, to advisory roles for governments, businesses and international agencies. He is an award winning documentary maker and author of Don’t Even Think About It: Why our Brains are Wired to Ignore Climate Change which addresses the psychology of climate change.

This event will be live-streamed to our YouTube channel here: