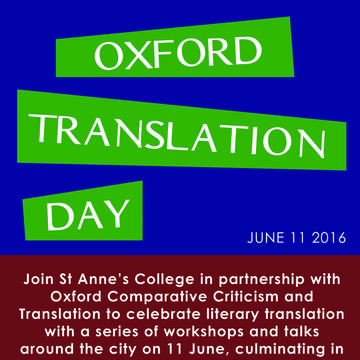 St Anne's and Other Venues

Every June, St Anne's runs Oxford Translation Day, a celebration of literary translation consisting of workshops and talks. The day culminates in the award of the Oxford-Weidenfeld Translation Prize.

Oxford Translation Day is a joint venture of the Oxford-Weidenfeld Translation Prize and Oxford Comparative Criticism and Translation (the research centre housed in St Anne’s and the Oxford Research Centre for the Humanities).

All Oxford Translation Day events are free and open to anyone, but registration will be required. (Eventbrite links listed below.)

3.30-4.30 pm. Modern Poetry in Translation: André Naffis-Sahely on the Poetry of Exile

3.30-4.30 pm. The Land Drenched in Tears: Translating the Uyghur Memoir

8pm. Dinner (by invitation only)

Winning poems from the Creative Multilingualism’s Babel competition for schools will be on display in the Ruth Deech building throughout both days.

Charlotte Bronte's Jane Eyre is not only an English book: it exists in over fifty languages, in over five-hundred translations. How can we make sense of this multilingual cloud of writing? What can we do with it? Join Matthew Reynolds, Eleni Philippou, Kasia Szymanska, and Yousif Qasmiyeh to explore the possibilities. You will follow many linguistic pathways and encounter several different Janes, all strangely different yet somehow the same.

The speakers are all attached to Creative Multilingualism’s Prismatic Translation project based at the University of Oxford.

In response to Brexit, worrying political nationalism, and the tightening of borders, this workshop celebrates the fluidity and movement of language and identities! We will take poems drawn from the Wretched Strangers literary anthology (2018) and translate them into multiple different languages, before translating our translations back into English. Native-speaker graduate students and early-career academics will assist and offer guidance on the translations. We will close the workshop by comparing the source poems and their retranslations into English to see what’s been both gained and lost in the process.

Participants should have at least GSCE level knowledge of any one of the following languages: French, Italian, Arabic, Polish, German, or Chinese.

Creative Translation in the Classroom

A workshop for teachers of MFL at primary and secondary level, exploring the use of ‘creative translation’.

As well as being a stimulating way of expanding pupils’ vocabulary and developing their linguistic flexibility, creative translation develops pupils’ critical awareness of other languages and cultures; highlights the value of knowing other languages; raises the profile, confidence and self-esteem of multilingual children; develops broad-spectrum literacy and decoding skills; promotes collaborative learning; and provides a springboard for creative writing and story-telling. This hands-on workshop will introduce participants to the principles of creative translation through a series of interactive exercises that can be used in the classroom from KS2 onwards. The workshop will be run by the co-directors of the new ‘Translation Exchange’ at Queen’s College Oxford, Charlotte Ryland and Jennifer Higgins.

When the English reader thinks of Romanticism, evocative and soulful poems by Lord Byron, Wordsworth, and Coleridge all spring to mind. However, Romanticism, with its glorification of nature, emotion, the individual, spanned Europe and produced truly magnificent literary works. This event hopes to introduce an English-speaking audience to Continental Romanticism, but also asks two key questions. Firstly, what does it mean to translate European Romantics for English-language readers of the twenty-first century? And secondly, what are the pleasures and challenges of bringing more central and lesser-known Romantic traditions into English? In this event, two translators will discuss their recent renderings of Romantic works from German and Polish. Howard Gaskill will present his translation of Friedrich Hölderlin's only novel Hyperion, or the Hermit in Greece (Open Book Publishers 2019) and Bill Johnston will discuss his Guggenheim-funded translation of Adam Mickiewicz's Pan Tadeusz, considered the last great epic poem in European literature (Archipelago 2018). The event will be chaired by Nick Halmi.

Howard Gaskill is Honorary Fellow in German (Reader until 2001) at the University of Edinburgh. His work concentrates in German Romanticism (in particular Friedrich Hölderlin) and Scottish-German literary relations (in particular German Ossianism). He is a member of the editorial boards of Comparative Critical Studies and Translation & Literature.

Bill Johnston is Professor of Comparative Literature at Indiana University, Bloomington. He has received fellowships and awards for his translations from Found in Translation, the Guggenheim Foundation, the National Endowment for the Arts, the PEN America Center, and Three Percent. He was awarded the PEN Translation Prize and Three Percent’s Best Translated Book Award in 2012.

Nick Halmi is Professor of English and Comparative Literature at the University of Oxford and Margaret Candfield Fellow of University College, Oxford. He is the author of The Genealogy of the Romantic Symbol (OUP, 2007) and the editor of the Norton Critical Edition of Wordsworth’s Poetry and Prose (2013).

The Land Drenched in Tears: Translating the Uyghur Memoir

The Land Drenched in Tears by Söyüngül Chanishef is the first Uyghur language book to be published in English. It is a poignant memoir that provides a rare glimpse into the tumultuous history of Xinjiang (East Turkestan) during the Mao era from the perspective of an ethnic Tartar woman. The memoir follows Chanishef from her student years to her nearly two decades of imprisonment for her political activism, offering us a previously untold story of China’s Cultural Revolution and casting stark relief on the current situation in Xinjiang today.

This timely conversation with the book’s translator, Rahima Mahmut, will foreground the difficult reality in Xinjiang today, reflecting on the book’s translation and publication in English against the backdrop of state censorship and cultural erasure. We will speak to the politics of translating from a minoritized language into English, as well as the highly complex linguistic and cultural reality that informs Mahmut’s translation practice and her own journey as a translator (Mahmut had to learn to read Cyrillic script in order to read the book in the first place, as this Turkic language is written in different scripts inside and outside of China).

Rahima Mahmut is a London-based Uyghur singer, translator and human rights activist. Her translation of The Land Drenched in Tears received an English Pen grant.

Modern Poetry in Translation: André Naffis-Sahely on the Poetry of Exile

Join Modern Poetry in Translation for a reading and conversation with André Naffis-Sahely, whose translations include over twenty titles of fiction, poetry, and nonfiction from French and Italian. From Abu Dhabi, but born in Venice to an Iranian father and an Italian mother, André’s own book of poetry is entitled The Promised Land: Poems from Itinerant Life (Penguin UK, 2017). André will be reading translations from his forthcoming landmark anthology The Heart of a Stranger: An Anthology of Exile Literature (Pushkin Press, 2019), as well as from some of the poets he has translated for Modern Poetry in Translation, who include Frankétienne, Abdellatif Laâbi and Michèle Lalonde. After his reading, André will discuss his itinerant life as a translator withMPT editor Clare Pollard.

“This is Why”: Translators on Translating

Join acclaimed literary translators who have featured on prestigious shortlists and longlists to hear more about their translation practices and choices. They will discuss a short poem or passage that they recently translated, and give the audience insight into the “hows” and “whys” of their translatory approach! This year we are thrilled to be joined by Bryan Karetnyk, Celia Hawkesworth, Rosie Hedger, Rachael McGill, Nick Caistor, and Delija Valiukenas all shortlisted for the 2019 Oxford-Weidenfeld Prize. This session will be chaired by Karen Leeder.

Bryan Karetnyk is a Wolfson Scholar in the Humanities at University College London. He read Russian and Japanese at the University of Edinburgh. In recent years he has translated several major works by the émigré author Gaito Gazdanov, including The Spectre of Alexander Wolf (2013), The Buddha’s Return (2014) and The Flight (2016). He is also the editor and principal translator of the Penguin Classics anthology Russian Émigré Short Stories from Bunin to Yanovsky (2017). His writing has appeared in The Times Literary Supplement, the Los Angeles Review of Books and The Spectator.

Rosie Hedger completed her MA (Hons) in Scandinavian Studies at the University of Edinburgh. Rosie spent a year at the University of Oslo taking courses in Norwegian literature and researching for her dissertation on contemporary Norwegian fiction. Rosie was selected as a candidate for the British Centre for Literary Translation’s mentoring scheme for emerging translators in 2012, mentored by Don Bartlett. Rosie’s most recent translations have included work by Helga Flatland and Gine Cornelia Pedersen. Rosie’s translation of Agnes Ravatn’s The Bird Tribunal won an English PEN Translates Award in 2016 and was selected for BBC Radio 4’s Book at Bedtime. Her work has appeared in publications such as Words Without Borders, Asymptote and The Missing Slate.

Rachael McGill was born in the Shetland Islands. She lives with one foot in Britain, the other in Lisbon. She’s a playwright for stage and radio, prose writer and literary translator from French, German, Spanish and Portuguese. Her translation of The Desert and the Drum by Mbarek Ould Beyrouk is published by Dedalus. Her play The Lemon Princess is published by Oberon, as are her translations of the Kerstin Specht plays Marieluise (which won the Gate Theatre/Allied Domecq Translation Award) and The Time of the Tortoise. She has had short fiction published in anthologies, literary magazines and online. Her first novel, Fair Trade Heroin, was longlisted for the Linen Press First Chapter Award. It is coming out soon.

Delija Valiukenas graduated from New York City’s Hunter College and earned her Ph.D. in English Literature from Brown University, where her doctoral dissertation explored the linguistic and cultural dynamics of translation, as manifested in the Lithuanian translations of Shakespeare.  As a member of the faculty at Bridgewater State University in Massachusetts for 34 years, she taught upper-level courses in her area of specialization—Shakespeare—as well as introductory courses, primarily, in American literature. She was involved in the development of an interdisciplinary program in the Holocaust and taught the Literature of the Holocaust until she retired.  She has authored a Composition text (Random House) to address the problems of Freshman writing; written and translated articles for Baltic and Lithuanian journals; and was commissioned by the Lithuanian National Theatre of Kaunas to translate several Lithuanian plays into English.

Karen Leeder is a writer, translator and academic, and teaches German at New College, Oxford where she works especially on modern poetry and runs the project Mediating Modern Poetry. She translates contemporary German literature into English, including works by Volker Braun, Michael Krüger Hans Magnus Enzensberger and Raoul Schrott. Her most recent translations include Evelyn Schlag’s All Under one Roof (Carcanet) which was the PBS summer translation selection (2018) and she was awarded an English PEN award and an American PEN/Heim award for her translations from Ulrike Almut Sandig’s Dickicht (Thick of it) which appeared with Seagull in 2018. Her translations of Durs Grünbein stretch back over a decade and were awarded the Stephen Spender Prize (2011) and the John Frederick Nims Memorial Prize (2018).

The Oxford–Weidenfeld Prize is for book-length literary translations into English from any living European language. It aims to honour the craft of translation, and to recognise its cultural importance. The prize will be presented to the winner. This year’s judges are Charlotte Ryland, James Partridge, Emma Claussen, and Simon Park (Chair).