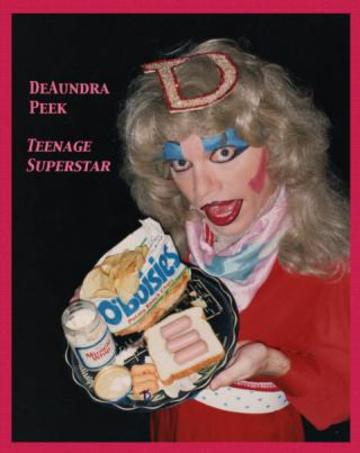 The TORCH Queer Studies Network is pleased to welcome Professor Margaret (“Molly”) McGehee to give a public lecture, ‘“Vienners” at Odum’s: DeAundra Peek and the Atlanta Televisual Drag Scene’.

With her signature exclamation of “Yeaaaaaa!,” the forever-sixteen-year-old DeAundra Peek--performed by Atlanta, Georgia local Rosser Shymanski--served as an enthusiastic emcee for several variety shows on the city's public access channel from the late 1980s to the early 2000s. In examining Peek’s shows within a broader context of LGBTQ entertainment, social life, activism, and politics in Atlanta during the late 1980s to early 2000s, it becomes clear that DeAundra (as well as other Atlanta-based drag queens) did not so much “expand southernness,” as scholar Tara McPherson has argued, as expand gayness—i.e., increase gay visibility—in the United States to include LGBTQ populations within Atlanta, in effect “unmooring” Atlanta from its associations with “southernness." Appearing on public access television in a southern city as well as in New York, Minneapolis, and other clubs around the country during the era of the AIDS crisis, Shymanski used camp drag to make known and give voice and vitality to gay identities within an urban center in the South, signaling to her audience that Atlanta was a great place to be gay.

Margaret T. (“Molly”) McGehee is Associate Professor of English & American Studies at Oxford College of Emory University in Oxford, Georgia (USA), and serves as President of the Southern American Studies Association. McGehee's current book project focuses on Atlanta imaginaries in modern and contemporary fiction. Her scholarly work has appeared in Cinema Journal, Studies in American Culture, Southern Spaces, North Carolina Literary Review, and Gale’s American Writers series, with forthcoming articles in edited collections, including The Queer South on Screen (ed. Tison Pugh) and Detecting the South (eds. Deborah Barker and Theresa Starkey). She is the recipient of multiple teaching and service awards and regularly offers interdisciplinary undergraduate courses within the field of U.S. literary and cultural studies, with a particular focus on the U.S. South. McGehee received her doctorate in American Studies from Emory University, a masters degree in Southern Studies from the University of Mississippi, and her bachelor of arts degree in History from Davidson College.

A response to the paper will be given by Ruth Ramsden-Karelse, a DPhil candidate in the English Faculty. Ruth is originally from South Africa and is primarily interested in drag performances as sites at which gender, sexuality, race and class intersect in their full contextual complexity. The Stuart Hall Doctoral Studentship, in association with Merton College, TORCH and the Stuart Hall Foundation, supports Ruth's DPhil research on drag performance in Cape Coloured communities since 1950.

All are very welcome to attend.

Please note that Molly will also be leading an open seminar on 16th November on “Camping Out: The Use and Value of Camp Drag within LGBTQ Activism.”

The venue is fully accessible, but if you have any questions or specific requirements please email ruth.ramsden-karelse@merton.ox.ac.uk