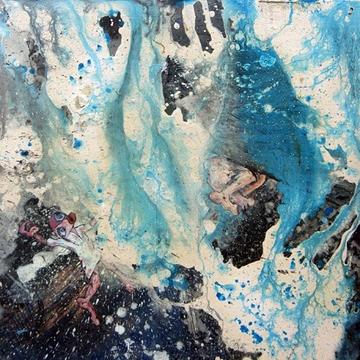 An art film like no other. There are no digital tricks, no special effects, no state of the art animation. Instead, it is one woman’s attempt to build a world from the materials at her disposal – duvets, tights, paint, and her own arts of disguise and transformation – and in this way to tell the secret history of her land.

The woman’s name is Ola, and her land is an island underneath the known world. An island made in the image of a poem.

That poem is the greatest, guiltiest epic of the English-speaking Renaissance: Edmund Spenser’s The Faerie Queene, a violent, beautiful, hallucinogenic work, written in the service of religious fundamentalism and cultural genocide. A poem of idealism, temptation, ravishing gorgeousness; a poem of coercion, prevention, and rape.

Ola saw that this poem had written the future. She feared that it had written her future too.

Like the poem that is its inspiration and antitype, Demons Land offers a dark allegory of colonisation: as a political and racial act, and as an expression of sexual desire and imaginative speculation. This vast, conflicted poem becomes the seminal text of the unfinished modern world.

Demons Land explores the complicity of art in the dreams and crimes of empire – and of men.

The film of Demons Land is the centrepiece of a multi-media travelling exhibition that also features paintings, sculptures, soundscapes, and text. The film was written and produced by Simon Palfrey; acting by Stephanie Greer; artwork for both film and installation by Tom de Freston; editing and cinematography by Mark Jones; music and sound design by Jethro Cooke and Luke Lewis. The film was co-directed by Palfrey, Jones, and de Freston. Collectively they are OLA.

For more information and to book your tickets, please click here.