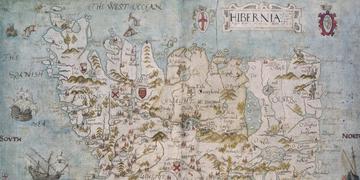 From the late-twelfth-century conquest to the union of the kingdoms, Ireland was a key constituent element of the dominions of the monarchs of England and Great Britain, their royal title and identity. Over six centuries institutions, policies and attitudes developed to enable the crown to tackle the challenges of governing Ireland and its inhabitants. The records which such processes generated are voluminous and afford rich, multi-faceted insights into the administration of pre-modern Ireland, its political and legal culture, its geography, environment, society, economy and trade. As the custodian of the records of royal government, The National Archives arguably holds the world’s most important collection of records of relevance to the history of pre-modern Ireland but it remains under-utilised.

In bringing together historians of medieval and early modern Ireland, this symposium aims to facilitate discussion of continuity and change across six centuries of Irish history by putting into sharper focus the collections with relevance to pre-modern Ireland at The National Archives. It also aims to consider the archival context and history of this vast collection.

Please follow the link for the conference programme and the day tickets.