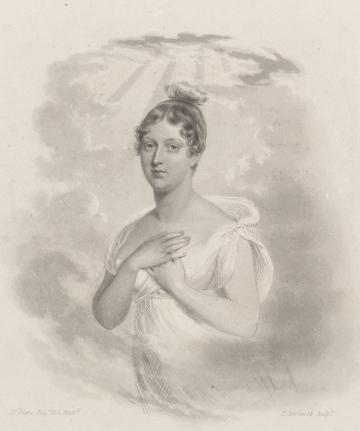 An interdisciplinary symposium dedicated to Princess Charlotte of Wales (1796-1817) will take place in the Print Room at the Ashmolean Museum. The event, supported by the Ashmolean Project Portal and the TORCH Celebrity Research Network, will bring together scholars from History, Art History, and English Literature to discuss the vital position that this young princess occupied during her short life.

Throughout her twenty-one years, Princess Charlotte was considered the ‘Hope of England’. The product of one of the most dysfunctional marriages in British royal history, her life was plagued by restrictions, betrayals, abandonment and misfortune. After her marriage to Prince Leopold of Saxe Coburg her luck seemed to have changed but just over a year later, she gave birth to a stillborn son and tragically died shortly afterwards.  The nation mourned her loss on a scale almost without precedent and soon afterwards, biographies, poems and commemorative prints were produced, a number of which are now held at the Ashmolean Museum. Princess Charlotte’s death ended the direct line of Hanoverian succession and the Regent’s siblings raced to produce a child that would take her place.

This symposium will facilitate a discussion that considers Princess Charlotte as a fulcrum in the latter years of the Hanoverian dynasty. Referring to prints and drawings from the collection of the Ashmolean, we will use Princess Charlotte as a rallying point from which to work inwards and outwards. We will discuss the hostile relationship between her parents, the Prince Regent and Caroline of Brunswick and how their treatment of their daughter was regarded by the public, the political implications of Charlotte’s death to Britain and Europe as a whole, the development of a familial ideal that came to fruition during the reign of Charlotte’s cousin, Queen Victoria, as well as any other topics or issues that emerge. Such a discussion will benefit from a multi-disciplinary approach, so we encourage academics from various departments to participate.