Epic Performances from the Middle Ages into the Twenty-First Century: A Book at Lunchtime 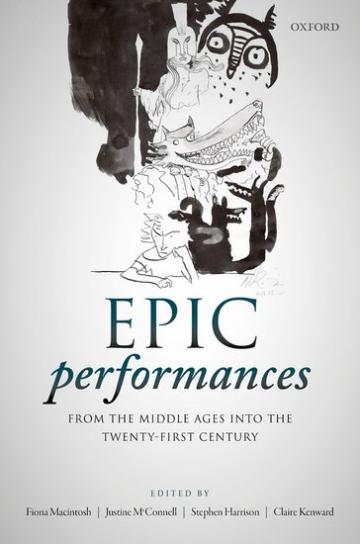 This volume represents the first systematic attempt to chart the afterlife of epic in modern performance traditions, with chapters covering not only a significant chronological span, but also ranging widely across both place and genre, analysing lyric, film, dance, and opera from Europe to Asia and the Americas. What emerges most clearly is how anxieties about the ability to write epic in the early modern world, together with the ancient precedent of Greek tragedy's reworking of epic material, explain its migration to the theatre. This move, though, was not without problems, as epic encountered the barriers imposed by neo-classicists, who sought to restrict serious theatre to a narrowly defined reality that precluded its broad sweeps across time and place. In many instances in recent years, the fact that the Homeric epics were composed orally has rendered reinvention not only legitimate, but also deeply appropriate, opening up a range of forms and traditions within which epic themes and structures may be explored. Drawing on the expertise of specialists from the fields of classical studies, English and comparative literature, modern languages, music, dance, and theatre and performance studies, as well as from practitioners within the creative industries, the volume is able to offer an unprecedented modern and dynamic study of 'epic' content and form across myriad diverse performance arenas.

Fiona Macintosh is Professor of Classical Reception, Director of the Archive of Performances of Greek and Roman Drama (APGRD), and Fellow of St Hilda's College at the University of Oxford. She is the author of Dying Acts: Death in Ancient Greek and Modern Irish Tragic Drama (Cork University Press, 1994), Greek Tragedy and the British Theatre, 1660-1914 (with Edith Hall; OUP, 2005), and Sophocles: Oedipus Tyrannus (CUP, 2009), and has also edited numerous APGRD volumes, including most recently The Ancient Dancer in the Modern World: Responses to Greek and Roman Dance (OUP, 2010) and The Oxford Handbook of Greek Drama in the Americas (with Kathryn Bosher, Justine McConnell, and Patrice Rankine; OUP, 2015).

Justine McConnell is Lecturer in Comparative Literature at King's College London. She is the author of Black Odysseys: The Homeric Odyssey in the African Diaspora since 1939 (OUP, 2013), and co-editor of three volumes: Ancient Slavery and Abolition: From Hobbes to Hollywood (with Edith Hall and Richard Alson; OUP, 2011), The Oxford Handbook of Greek Drama in the Americas (with Kathryn Bosher, Fiona Macintosh, and Patrice Rankine; OUP, 2015), and Ancient Greek Myth in World Fiction since 1989 (with Edith Hall; Bloomsbury, 2016).

Stephen Harrison is Professor of Latin Literature at the University of Oxford, Fellow and Tutor in Classics at Corpus Christi College, Oxford, and Adjunct Professor at the universities of Copenhagen and Trondheim. He has published extensively on Latin literature and its reception, including the following volumes: A Commentary on Vergil, Aeneid 10 (OUP, 1991), Generic Enrichment in Vergil and Horace (OUP, 2007), Living Classics: Greece and Rome in Contemporary Poetry in English(edited volume; OUP, 2009), Louis MacNeice: The Classical Radio Plays (co-edited with Amanda Wrigley; OUP, 2013), and Classics in the Modern World: A Democratic Turn? (co-edited with Lorna Hardwick; OUP, 2013).

Claire Kenward is Archivist and Researcher at the University of Oxford's Archive of Performances of Greek and Roman Drama (APGRD). She has published on the reception of Greek drama and epic in early modern England, as well as on the reception of Homer's Iliad in science fiction and speculative fantasy; she is also the co-author and curator of the APGRD's two multimedia, interactive eBooks: Medea - A Performance History (2016) and Agamemnon - A Performance History (2019).

The editors will be joined an expert panel to discuss the book and its themes: