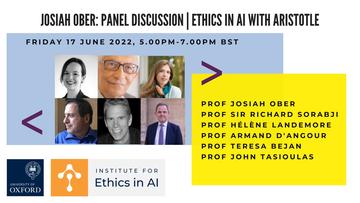 Panel Discussion with Josiah Ober | Ethics in AI with Aristotle

Presented by the Institute for Ethics in AI

The recording of the event below is also available Ethics in AI YouTube channel.

The Markos & Eleni Kounalakis Chair in Honor of Constantine Mitsotakis

Professor of Political Science and Classics

Josiah Ober, in the School of Humanities and Science, works on historical institutionalism and political theory, focusing on the political thought and practice of the ancient Greek world and its contemporary relevance. He is the author of a number of books mostly published by Princeton University Press, including Mass and Elite in Democratic Athens (1989), Political Dissent in Democratic Athens (2008), Democracy and Knowledge (2008). He has also published about 75 articles and chapters, including recent articles in American Political Science Review, Philosophical Studies, Hesperia, Polis, and Transactions of the American Philological Association.His new book on The Rise and Fall of Classical Greece will appear in Spring 2015, from Princeton UP.  It  documents and explains the remarkable Greek efflorescence of ca. 800-300 BCE, the Macedonian conquest of the late fourth century, and the persistence of economic flourishing into the Hellenistic era. Other work in progress includes a general theory of democracy, a study of rational cooperation and useful knowledge in Greek political thought.

CBE, FBA is a British historian of ancient Western philosophy, and Professor of Philosophy Emeritus at King's College London.

Hélène Landemore is Professor of Political Science (with a specialization in political theory). Her research and teaching interests include democratic theory, political epistemology, theories of justice, the philosophy of social sciences (particularly economics), constitutional processes and theories, and workplace democracy. Hélène is the author of Hume (Presses Universitaires de France: 2004), a historical and philosophical investigation of David Hume’s theory of decision-making; Democratic Reason (Princeton University Press: 2013, Spitz prize 2015), an epistemic defense of democracy; Open Democracy (Princeton University Press 2020), a vision for a new kind, more open form of democracy based on non-electoral forms of representation, including representation based on random selection; and Debating Democracy (Oxford University Press 2021), with Jason Brennan, where she argues against her co-author that we need more rather than less democracy.

Armand D’Angour is a Professor of Classics at Oxford and Fellow of Jesus College. His book The Greeks and the New was published in 2011 by CUP. He has written articles and chapters on the music, literature, and culture of ancient Greece and Rome, and has conducted research into the sounds of ancient Greek music. Recent books include Socrates in Love: The Making of a Philosopher (Bloomsbury 2019), and How to Innovate: an Ancient Guide to Creative Thinking (Princeton 2021).

Professor of Political Theory and Fellow of Oriel College at the University of Oxford. She arrived in Oxford from the University of Toronto in 2015. In 2021, Prof Bejan was awarded the Philip Leverhulme Prize in Politics, which celebrates early career researchers who have already achieved international recognition and have exceptional future promise.

The Institute for Ethics in AI will bring together world-leading philosophers and other experts in the humanities with the technical developers and users of AI in academia, business and government. The ethics and governance of AI is an exceptionally vibrant area of research at Oxford and the Institute is an opportunity to take a bold leap forward from this platform.

Every day brings more examples of the ethical challenges posed by AI; from face recognition to voter profiling, brain machine interfaces to weaponised drones, and the ongoing discourse about how AI will impact employment on a global scale. This is urgent and important work that we intend to promote internationally as well as embedding in our own research and teaching here at Oxford.