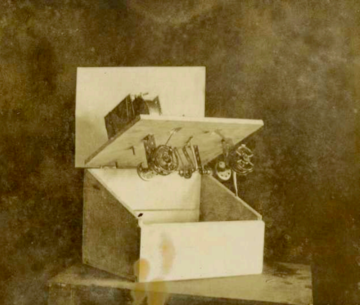 In this 'preview' of his forthcoming monograph Reading Machines in the Modernist Transatlantic (EUP, 2020), Eric White peers past the imposing shadows of the 'technological sublime' to explore the bathos of technology in dadaist inventions. These 'techno-bathetic avant-gardes' delighted in the messy particulars, mundane negotiations, and unintended, even ridiculous, consequences of technology’s transduction in culture. Beginning with the multimodal works of Francis Picabia, the paper goes on to explore writing and inventions by the experimental writers Rose Brown and Mina Loy. For the first time, it unveils Rose Brown's Reading Machine, a fully motorised version of a prototype by her husband Bob, and a previously unknown invention by Mina Loy – a thermoplastic she called ‘verrovoile’.

As parasites and saboteurs, avant-gardes could become the spanner in the works that disrupted the conceptual fluency of Machine-Age culture; as early adopters and entrepreneurs, they could harness specific technical objects or ensembles for their own purposes, or speculate about possible future uses; and as hackers and tinkerers, they could pick and choose between these options, while introducing others. This paper argues that when combined with their writing, these vanguardists' Everyday Machines were sophisticated technical objects that mediated complex cultural relationships. It also restores credit to forgotten inventions by women vanguardists, which proposed new, non-servile relationships to technology, within and beyond their creative practices.

Dr Eric White is Senior Lecturer in American Literature at Oxford Brookes University. He works on American modernism in the transatlantic context, and his research focuses on avant-garde writing, literary networks, and technology. Eric is founder of the Avant-Gardes and Speculative Technology (AGAST) Project, an interdisciplinary consortium that re-creates the inventions of twentieth-century writers and artists using Augmented Reality. He is the author of Transatlantic Avant-Gardes: Little Magazines and Localist Modernism (Edinburgh University Press: 2013), editor of The Early Career of William Carlos Williams: A Critical Facsimile Edition of Uncollected Prose and Manuscripts (Texas Tech University Press: 2013), and co-editor of Readies for Bob Brown's Machine: A Critical Facsimile Edition (EUP 2020). His new monograph, Reading Machines in the Modernist Transatlantic, will be published by Edinburgh University Press this year.