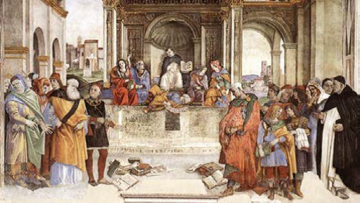 Ann Giletti is hosting a conference on 'Forbidden Ideas: Medieval Heresy and the Scholastics' in association with Oxford Medieval Studies, sponsored by the Oxford Research Centre in the Humanities (TORCH).

What made an idea heretical in the late Middle Ages? There was a canon law definition, but in practice how did professionals such as theologians, bishops and inquisitors use the term? And how did they use it when facing a controversial idea not previously addressed by a pope or general Church council? This multi-disciplinary conference will take the form of a workshop to explore heresy in the context of medieval scholastics, as compared with authorities confronting heretical movements. It proposes to take a fresh look at medieval definitions of heresy and uses of the term outside its canon law definition. It will do this by drawing together specialists on the practices and writings of medieval authorities confronting heresy (such as inquisitors and bishops) and specialists on the thinking of scholastics (theologians and philosophers) handling ideas conflicting with Christian faith. The presence of scholastics in the history of medieval heresy mainly takes two forms. On the one hand, through their discourse and debates, they played a part in the eventual definition of certain beliefs as heretical. On the other hand, their philosophical and theological explorations occasionally led them into controversial areas, making them targets of accusations themselves. Interestingly, historians of heresy tend to focus on popular movements, such as Catharism, while cases of scholastics suspected of heresy are treated as a distinct category, and by different specialists. The part played by scholastics in defining Church doctrine and heresy is yet a third, separate area of research. This conference will gather together experts in diverse disciplines to offer their perspectives on how we as historians can characterise medieval uses of the term ‘heresy’. Presentations will contribute analyses and case studies from the fields of medieval history, theology, canon law, and philosophy/science. Taken together, these perspectives can help us to formulate an understanding of how in the late Middle Ages heresy was defined and understood, and how ideas came to be classed as heretical.

With generous sponsorship by Marie Curie Actions at the European Commission, Oxford Medieval Studies, and The Oxford Research Centre in the Humanities.