Click here to book for each or all sessions 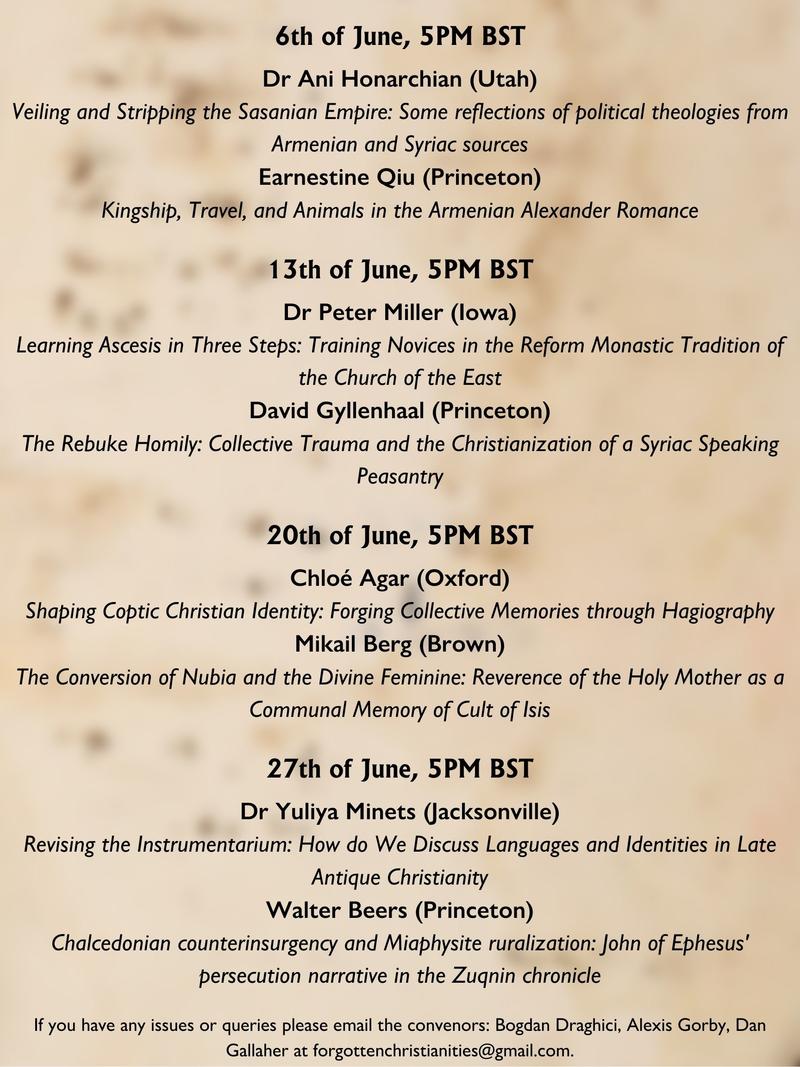 For the purposes of this project, ‘Forgotten Christianities’ are defined as those Christian linguistic and ethnic self-defined groups which traditionally have been overlooked by mainstream academia including, Georgian, Syriac, Armenian, Ethiopic, Coptic, and Arabic Christianity. The “Forgotten Christianities” seminars will explore critical theories of identity formation, communal memory, and intellectual exchange in the history of the Eastern and Oriental Churches.

Each session will bring together doctoral students and ERCs from various fields such as history, archaeology, theology, and the social sciences. Spanning Late Antiquity, the early Islamic era, and the Middle Ages, they will provide a diachronic and kaleidoscopic view of these historical communities and their self-representation. Participants are invited to engage critically with a range of theoretical frameworks and methodologies, such as postcolonial studies, memory studies, the history of ideas, and the development of cultural, religious, and social identity. Through exploring Christianities outside of Western Europe, the seminars aim to contribute to the paradigm shift which decentralises academic interest from a Eurocentric perspective, while showcasing the interconnectedness of societies.

This seminar series is funded by the Ancient World Research Cluster at Wolfson College, Oxford and supported by The Oxford Research Centre in the Humanities (TORCH).

Click here to book for each or all sessions

'Veiling and Stripping the Sasanian Empire: Some reflections of political theologies from Armenian and Syriac sources'

'Kingship, Travel, and Animals in the Armenian Alexander Romance'

'Learning Ascesis in Three Steps: Training Novices in the Reform Monastic Tradition of the Church of the East

'The Rebuke Homily: Collective Trauma and the Christianization of the Syriac Speaking Peasantry

The Conversation of Nubia and the Divine Feminine: Reverence of the Holy Mother as a communal Memory of  Cult of Isis'

'Revising the Instrumentarium: How do we discuss Languages and Identities in Late Antique Christianity'