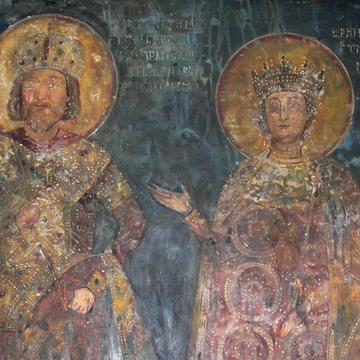 Group discussion facilitated by Matthew Kinloch (Austrian Academy of Sciences, Vienna, Moving Byzantium Project, FWF) on the topic of gender, characters, and identificatory practices in late Byzantine historiography on the basis of his pre-circulated paper ‘In the Name of the Father, the Husband, or some other Man: The Identification and Subordination of Female Characters in the Chronikē Syngraphē of George Akropolites’.

Additional Readings: *Ballif, M., ‘Re/dressing histories; Or, on re/covering figures who have been laid bare by our gaze’, Rhetoric Society Quarterly 22 (1992), 91-8. [Short and thought provoking position piece, which I’ve found highly influential for my thinking.]

*Kaldellis, A., ‘The Study of Women and Children: Methodological challenges and new directions’, in P. Stephenson (ed.), The Byzantine World (Abingdon, 2010), 61-71. [Attempt by Kaldellis to head off a postmodern split in Byzantine studies.]

Messis, C., ‘Review of Questions of Gender in Byzantine Society ed. by Bronwen Neil and Lynda Garland’, The Catholic Historical Review 101 (2015), 148-9. [Review outlining and critiquing the current state of research in Byzantine studies, especially the absence of serious consideration of gender.]

This meeting is a collaboration between the TORCH New Critical Approaches to the Byzantine World Network and the Project Moving Byzantium, funded by the Wittgenstein-Prize of the Austrian National Research Foundation (FWF) - http://rapp.univie.ac.at/