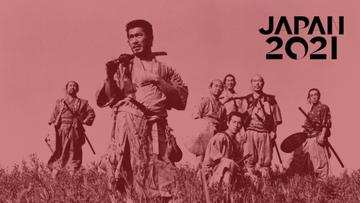 This November we will be taking part in the BFI’s extensive Japan 2021 Season. We are incredibly excited to be showing 12 classic films across four consecutive weekends this November, each weekend focussing on a theme celebrating the brilliance of Japanese cinema.

We will be showing some of the most celebrated classics of Japanese cinema, including films by Akira Kurosawa, Yasujirō Ozu, and Hirokazu Koreeda. We have also teamed up with The Oxford Research Centre in the Humanities to put on a very special one-off event harking back to the very inception of Japanese cinema and the days of Benshi performers (date and time TBC).

Tickets for this season will go on sale on Friday 8th October, including a 15% discount if you purchase tickets for all three screenings on any given weekend. For films showing back-to-back on the same day, there will be at least one hour between performances so there is plenty of time to get food and drink if you’re planning to watch as many films as possible!

On Sunday 7th November we will be devoting a full day to some of the most acclaimed samurai classics by legendary filmmaker Akira Kurosawa. We will be showing his atmospheric Macbeth adaptation Throne of Blood (1.30pm), legendary action epic Seven Samurai (4.30pm) and the hugely influential Yojimbo (9pm).

On Saturday 13th and Sunday 14th, we will be showing Yasujirō Ozu’s much loved Noriko Trilogy – three moving domestic dramas about family dynamics, all focussing on a young woman called Noriko, played by Setsuko Hara. All three films have been heralded as some of the finest examples of Japanese cinema, with the final film in the series – Tokyo Story – regularly touted by filmmakers and critics as the greatest film ever made. Both Late Spring (3pm) and Early Summer (6pm) will be showing on Saturday 13th November, and Tokyo Story (3pm) will be showing on Sunday 14th November.

One of the most exciting movements of Japanese cinema has been in animation, dating right back the mid-20th Century. On Friday 19th and Saturday 20th November, we will be screening some of the most radical, mind-bending sci-fi infused anime titles released between the late-80s and mid-00s. Come and see the colossal cyberpunk classic Akira (9pm) on Friday 19th November and mind-bending sci-fi Paprika (9pm) on Saturday 20th November. One other title TBC.

For our final weekend of the season, we will be celebrating 30 years of one of the greats of modern Japanese cinema – Hirokazu Kore-eda. Between Friday 26th and Sunday 28th, we will show three of his films, each of which were released at ten-year intervals, offering a 30-year scope of one of our favourite filmmakers working today. We will be showing the high-concept After Life (8.45pm) on Friday 26th November, exquisite family drama Still Walking (6.30pm) on Saturday 27th November, and finally Palme d’Or-winning drama Shoplifters (6pm) on Sunday 28th November.

All screenings are part of Japan 2020: Over 100 years of Japanese Cinema, a UK-wide film season supported by National Lottery and BFI Film Audience Network. bfijapan.co.uk