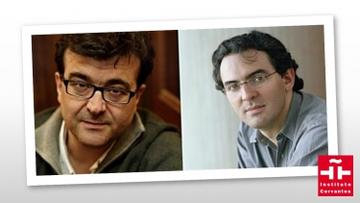 Two of the best-known writers from the Spanish-speaking world will be discussing the state of the modern novel. In a discussion chaired by Matthew Reynolds, Javier Cercas and Juan Gabriel Vásquez will be talking about their work, auto-fiction and the development of the novel over the course of the last century.

Javier Cercas was born in 1962. He is a novelist, short story writer and essayist. His books include Soldiers of Salamis(which sold more than a million copies worldwide, won six literary awards in Spain, was filmed by David Trueba and in Britain won the 2004 Independent Foreign Fiction Prize), The Tenant and The Motive, The Speed of Light, The Anatomy of a Moment (which won Spain’s National Narrative Prize) and Outlaws (shortlisted for the Dublin Literary Award 2016). His latest book, The Blind Spot, translated by Anne McLean, is published by MacLehose Press on 3 May 2018.

Juan Gabriel Vásquez is the author of four previous novels including The Informers, The Secret History of Costaguana, Reputations and The Sound of Things Fallingand of the story collection The All Saints’ Day Lovers. He is also the translator into Spanish of works by E. M. Forster, John Hersey and Victor Hugo. His latest novel is The Shape of the Ruins, translated by Anne McLean and published by MacLehose Press on 3 May 2018.

This event is supported by the Instituto Cervantes.