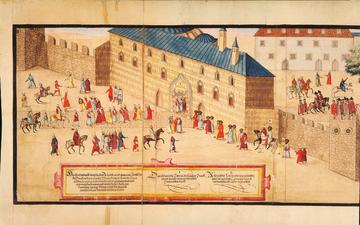 All major conflicts in sixteenth- and seventeenth-century Europe, in one way or another, involved the House of Habsburg. The German Reformation – ever present in the year which marks the quincentenary of Luther’s 95 theses – was also, though of course not exclusively, a movement of resistance against Habsburg efforts to assert political dominance in the Holy Roman Empire. Other developments such as the Dutch Revolt, the so-called Turkish Wars, the Polish-Lithuanian interregna, and the quest for lasting alliances with the Ottoman Empire by France, the Dutch Republic, and England similarly attest to the Habsburgs’ determination to assert and expand their power across the continent.

The Habsburg emperors, kings, and archdukes as well as their advisers consequently had great need for information on which to base their wide-ranging and ambitious plans. But how such information was gathered and how it impacted decision making is understood only imperfectly at present.

Focusing on the mid-1570s and early 1580s, this talk will examine the organisation, funding, and activities of Austrian-Habsburg foreign intelligence, drawing particularly on the rich material concerning the Ottoman Empire surviving in the Austrian State Archives as a result of the special attention paid to the ‘Turk’ as the Habsburgs’ ‘archenemy’ (Erbfeind) and main imperial rival. Such fundamental research into the diplomatic, military, and administrative history of the Habsburg empire is vital for the history of ‘international’ relations in this period, but also an essential step in unravelling the cultural history of decision making.