LAUNCH of the Institute for Ethics in AI with Sir Nigel Shadbolt, Joshua Cohen & Hélène Landemore 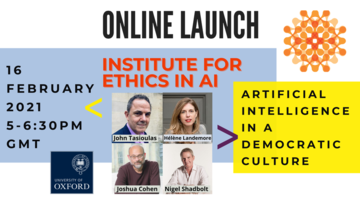 Introduced by the Vice-Chancellor, Professor Louise Richardson and chaired by Professor John Tasioulas.

Professor Sir Nigel Shadbolt is Principal of Jesus College Oxford and a Professor of Computer Science at the University of Oxford. He has researched and published on topics in artificial intelligence, cognitive science and computational neuroscience. In 2009 he was appointed along with Sir Tim Berners-Lee as Information Advisor to the UK Government. This work led to the release of many thousands of public sector data sets as open data. In 2010 he was appointed by the Coalition Government to the UK Public Sector Transparency Board which oversaw the continued release of Government open data. Nigel continues to advise Government in a number of roles. Professor Shadbolt is Chairman and Co-founder of the Open Data Institute (ODI), based in Shoreditch, London. The ODI specialised in the exploitation of Open Data supporting innovation, training and research in both the UK and internationally.

Professor Joshua Cohen
Joshua Cohen is a political philosopher. He has written on issues of democratic theory, freedom of expression, religious freedom, political equality, democracy and digital technology, good jobs, and global justice. His books include On Democracy; Democracy and Associations; Philosophy, Politics, Democracy; Rousseau: A Free Community of Equals; and The Arc of the Moral Universe and Other Essays. He is co-editor of the Norton Introduction to Philosophy. Cohen taught at MIT (1977-2005), Stanford (2005-2014), is currently on the faculty at Apple University, and is Distinguished Senior Fellow in Law, Philosophy, and Political Science at Berkeley. Cohen held the Romanell-Phi Beta Kappa Professorship in 2002-3; was Tanner Lecturer at UC Berkeley in 2007; and gave the Comte Lectures at LSE in 2012. Since 1991, he has been editor of Boston Review.

Professor Hélène Landemore (Yale) is Associate Professor of Political Science, with Tenure. Her research and teaching interests include democratic theory, political epistemology, theories of justice, the philosophy of social sciences (particularly economics), constitutional processes and theories, and workplace democracy. Hélène is the author of Hume (Presses Universitaires de France: 2004), a historical and philosophical investigation of David Hume’s theory of decision-making; Democratic Reason (Princeton University Press: 2013, Spitz prize 2015), an epistemic defense of democracy; and Open Democracy (Princeton University Press 2020), a vision for a new kind, more open form of democracy based on non-electoral forms of representation, including representation based on random selection.

Due to her recent appointment to the Biden administration, Professor Alondra Nelson is unable to participate in this event, but we look forward to welcoming her to another event in the future. We are very pleased to announce that Professor Hélène Landemore will join the panel. Professor Landemore is a leading theorist of democracy (profiled recently in The New Yorker) who has just published an important book on democratic theory entitled 'Open Democracy: Reinventing Popular Rule for the Twenty-First Century' (Princeton).