Light in Germany: Scenes from an Unknown Enlightenment 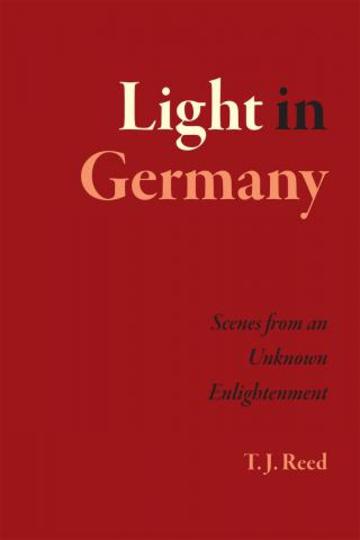 Part of Book at Lunchtime, a fortnightly series of bite size book discussions, with commentators from a range of disciplines. Free, all welcome - no booking required. Join us for a sandwich lunch from 12:45, with discussion from 13:00 to 13:45.

Jim Reed (Taylor Professor of German Language and Literature, University of Oxford) will discuss his book Light in Germany: Scenes from an Unknown Enlightenment with:

The event will be chaired by Ritchie Robertson (Taylor Professor of German, University of Oxford)

Germany’s political and cultural past from ancient times through World War II has dimmed the legacy of its Enlightenment, which these days is far outshone by those of France and Scotland. In this book, T. J. Reed clears the dust away from eighteenth-century Germany, bringing the likes of Kant, Goethe, Friedrich Schiller, and Gotthold Lessing into a coherent and focused beam that shines within European intellectual history and reasserts the important role of Germany’s Enlightenment.

Reed looks closely at the arguments, achievements, conflicts, and controversies of these major thinkers and how their development of a lucid and active liberal thinking matured in the late eighteenth century into an imaginative branching that ran through philosophy, theology, literature, historiography, science, and politics. He traces the various pathways of their thought and how one engendered another, from the principle of thinking for oneself to the development of a critical epistemology; from literature’s assessment of the past to the formulation of a poetic ideal of human development. Ultimately, Reed shows how the ideas of the German Enlightenment have proven their value in modern secular democracies and are still of great relevance—despite their frequent dismissal—to us in the twenty-first century.