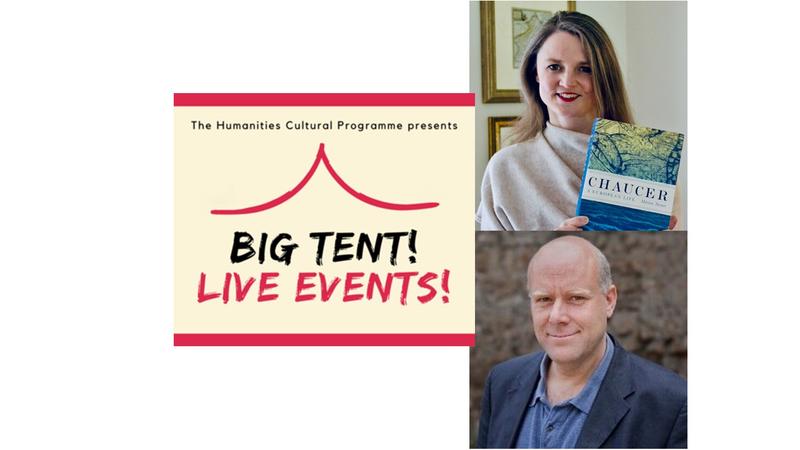 In this event, Marion and Matthew discuss their recent books – Matthew’s novel, Pilgrims, and Marion’s biography, Chaucer: A European Life – both of which focus on medieval journeys across Europe. They will discuss different aspects of medieval travel – ranging from colonialism in Wales to the expulsion of the Jews from England, from diplomacy and cultural exchange to pilgrimage, both real and imagined. One of the issues underpinning their work, and this conversation, is the question of what it means to be English and what it means to be European – both then and now.

Marion Turner works on late medieval literature and culture, focusing especially on Geoffrey Chaucer. Her most recent book, Chaucer: A European Life (Princeton, 2019) argues for the importance of placing Chaucer in multilingual and international contexts, tracing his journeys across Europe and his immersion in global trade routes and exchanges. It was named as a book of the year 2019 by the Times, the Sunday Times, and the TLS, and was shortlisted for the Wolfson History Prize 2020.

Matthew Kneale was born in London in 1960, the son of two writers and the grandson of two others. His father, Nigel Kneale, was a screenwriter for film and television, best known for the ‘Quatermass’ series. Matthew’s mother, Judith Kerr, is the author and illustrator of children’s books including ‘The tiger who came to tea’ and ‘Mog the forgetful cat’ while she has also written three autobiographical novels, beginning with ‘When Hitler stole pink rabbit’.

From his earliest years Matthew was fascinated by different worlds, both contemporary and from the past. After studying at Latymer Upper School, London, he read Modern History at Magdalen College, Oxford. During his university years he began travelling, seeing diverse cultures at first hand, in Asia, Europe and Latin America.

Matthew's books include: Whore Banquets, Inside Rose’s Kingdom, Sweet Thames, English Passengers, Small Crimes in an Age of Abundance, When we were Romans and An Atheist’s History of Belief.

When not writing Kneale continued to travel, visiting some eighty countries and seven continents. He also developed a fascination with languages, trying his hand at learning a number, from Italian, Spanish, German and French to Romanian and Amharic Ethiopian.

Matthew currently lives in Rome with his wife, Shannon, and their two children, Alexander and Tatiana.