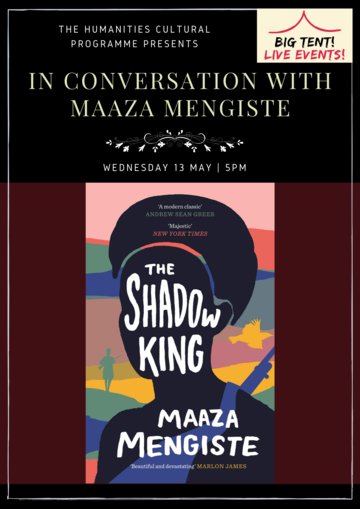 In conversation with Maaza Mengiste, author of The Shadow King.
This event is also part of the North-east Africa Forum at the African Studies Centre at the University of Oxford.

Hosted by Elleke Boehmer, Professor of World Literature in English (English Faculty, University of Oxford). Professor Boehmer is currently the Director for the Oxford Centre for Life Writing (OCLW) based at Wolfson College, and former Director of TORCH (2015-17), and also leads on the 'Writers Make Worlds' project - https://writersmakeworlds.com/

Maaza Mengiste is the author of the novels, Beneath the Lion's Gaze, selected by the Guardian as one of the 10 best contemporary African books; and The Shadow King, a finalist for the LA Times Books Prize, a New York Times' Notable Book of 2019 and one of TIME's Must-Read Books of 2019. She is the recipient of an American Academy of Arts and Letters award, the Premio il ponte, and fellowships from the Fulbright Scholar Program, the National Endowment for the Arts, Creative Capital, and LiteraturHaus Zurich. Her work can be found in The New Yorker, New York Review of Books, Granta, the Guardian, the New York Times, Rolling Stone, and BBC, amongst other publications.

Birhanu T. Gessese
Birhanu was born and raised in Addis Ababa, Ethiopia, and is now studying Humanities at Kenyon College, USA. He is currently on a year abroad studying English Literature at Exeter University, UK. He likes to compose stories, work with the camera, and illustrate in ink pen. Along with Korranda Harris, he recently interviewed Maaza Mengiste for Africa in Words.

Professor Richard Reid (History Faculty, University of Oxford) is a historian of modern Africa, focusing on the nineteenth and twentieth centuries. With a particular interest in the culture and practice of warfare in the modern period, part of Professor Reid's research interests includes the more recent armed insurgences, especially those between 1950s and the 1980s.
https://www.history.ox.ac.uk/people/professor-richard-reid

With the threat of Mussolini's army looming, recently orphaned Hirut struggles to adapt to her new life as a maid. Her new employer, Kidane, an officer in Emperor Haile Selassie's army, rushes to mobilise his strongest men before the Italians invade.

Hirut and the other women long to do more than care for the wounded and bury the dead. When Emperor Haile Selassie goes into exile and Ethiopia quickly loses hope, it is Hirut who offers a plan to maintain morale. She helps disguise a gentle peasant as the emperor and soon becomes his guard, inspiring other women to take up arms. But how could she have predicted her own personal war, still to come, as a prisoner of one of Italy's most vicious officers?

The Shadow King is a gorgeously crafted and unputdownable exploration of female power, and what it means to be a woman at war.