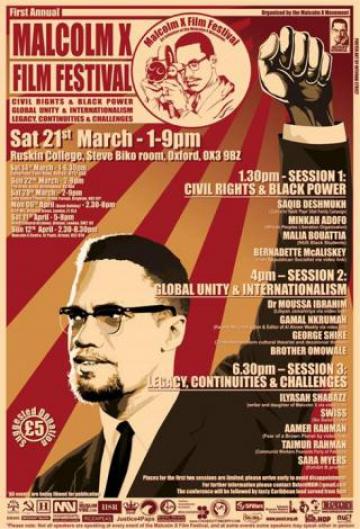 The Malcolm X Film Festival brings together revolutionary thinkers and fighters from around the globe to discuss Malcolm’s evolving political understanding and strategy and its application to the world today.

Organised into three panel discussions, each based around a specially assembled montage of Malcolm’s speeches and interviews on a specific theme, the festival aims to re-connect with Malcolm’s approach to  the struggle against oppression at home as part of the worldwide struggle against colonialism and neo-colonialism.

The first panel brings together two seasoned campaigners against police brutality in the UK with a representative of a new generation of activism against Islamophobia and war. Saqib Deshmukh, who has most recently been coordinating the ‘Justice for Paps’ campaign into the death of Habib ‘Paps’ Ullah during a police stop-and-search in 2008, and Minkah Odofo, a long-time activist with the United Friends and Families Campaign against deaths in police custody will be discussing ‘civil rights’ and Black Power with Malia Bouattia of NUS Black Students.

The second panel will discuss Malcolm’s understanding of internationalism and its relevance today, hearing from veterans of liberation struggles against Ian Smith's apartheid regime in Zimbabwe and NATO aggression in Libya, along with Kwame Nkrumah’s son, now international editor of the Egyptian weekly Al Ahram Weekly.

Finally, the last session of the day focuses specifically on Malcolm’s legacy today, and will hear from five cultural activists who have made great contributions to bringing issues of race and colonial oppression into mass consciousness. Swiss of So Solid Crew hit the headlines late last year with his single discussing the varied meanings of the ‘N-word’, whilst Sara Myers was a leader of the campaign against the ‘Exhibit B’ exhibition, both of them managing to bring issues of white supremacy and the enduring legacy of colonialism into public consciousness and debate. Aamer Rahman, from Asian-Australian comedy duo ‘Fear of a Brown Planet’, uses his comedy to satirise whiteness and white denial in as profound a way as any writer on the topic, whilst Taimur Rahman’s group Laal use music to raise anti-imperialist political consciousness in their homeland of Pakistan. We are also hoping that Malcolm’s daughter Ilyasah Shabazz, who has used written a memoir, a children’s book and now a novel on her father, will be joining us via skype.

The conference will be followed by tasty Caribbean food served from 9pm.