Self-Representation in Late Antiquity and Byzantium 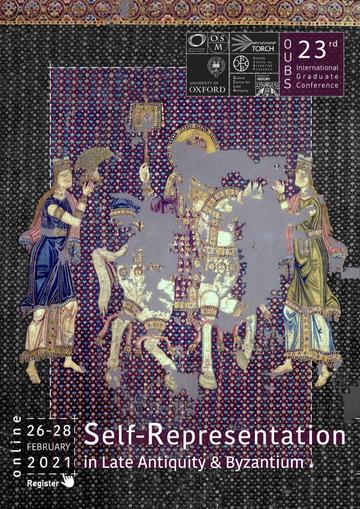 For an accessible format of the programme download the following Word document: https://oxfordbyzantinesociety.files.wordpress.com/2021/02/word-version-oubs-conference.docx

Self-representation is a process by which historical actors – individuals, communities and institutions – fashioned and presented a complex image of themselves through various media.

Referring to Byzantine portraits, Spatharakis claimed that this “form of representation cannot be divorced from its purpose and the requirements of the society in which the given visual language gains currency”. Equally, self-representation provides an original way to interpret the past, because this artificial and reflected image cannot be divorced from the cultural, social, economic, religious and political context of its time. As a methodological tool, it has received increasing attention in the field of Late Antique and Byzantine Studies, following the interest it has created in neighbouring fields such as Western Medieval or Early Modern studies.
The present call for papers aims to explore the cultural outputs of the Late Antique and Byzantine world – e.g. architecture, material culture, literary works – which conventionally or unconventionally can be understood as acts of self-representation. The Late Antique and Byzantine world was filled with voices and images trying to present and represent an idea of self. Some of the most famous examples of this are the lavish mosaics sponsored by imperial and aristocratic patrons, whose splendour still dazzles their observers and gives an idea of the kind of self-fashioning that they embody. Urban elites, such as churchmen, bureaucrats and intellectuals, constructed idealised personae through their literary works and the careful compilation of letter collections, while those of the provinces displayed their power through images on seals and inscriptions. In monastic typika, the founders presented themselves as pious benefactors, while donor epigraphy in rural churches secured the local influence of wealthier peasants. However, self-representation is not only a matter of introspection but also of dialogue with the “other”: such is the case of spolia, used to reincorporate a supposed classical past in one’s self-portrayal, or to create an image of continuity by conquerors. It is the conscious use of Byzantine motifs in Islamicate architecture, the fiction of Digenes Akritas, or the religious polemics of late Byzantium, pitting Muslim, Jews and Christians against one other. Through depicting what they were not, historical actors were (consciously or unconsciously) shaping their own identity.

This conference seeks to join the ongoing dialogue on self-representation in Late Antique and Byzantine Studies by providing a forum for postgraduate and early-career scholars to reflect on this theme in a variety of cultural media. In doing so, we hope to facilitate the interaction and engagement of historians, philologists, archaeologists, art historians, theologians and specialists in material culture.