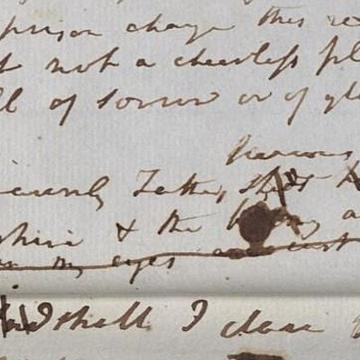 Our speakers explore the life and work of four Romantic women writers.

The world has not always been kind to women with disabilities. Their voices have been spoken over, their experiences manipulated to fit a narrative that is not their own, and sometimes even erased completely.

(Re)Acting Romanticism: Disability and Women Writers, a new community exhibition at Wordsworth Grasmere, was developed following a series of online workshops with women with disabilities who responded to writing by Dorothy Wordsworth, Mary Robinson, Frances Burney, and Susanna Blamire.

This event is led by Harriet McKinley-Smith, the project curator, with guests including workshop participants Nora Baker, Bridget Sinclair, Clara Baudet, Siobhan Fennell, and exhibition artist Rachael Sparkes. This event will showcase the four Romantic women writers, including a look at their manuscripts, as well as the process of creating the exhibition.

How to book and attend

Please read our guide to booking and attending online events before you purchase a ticket.

Live captions will be provided by Otter.

Harriet McKinley-Smith is a PhD student in English and French at Jesus College, Oxford. She is currently working on a Collaborative Doctoral Award titled ‘Relating Romantic Disabilities’ funded by the Open-Oxford-Cambridge Doctoral Training Partnership, the Clarendon Fund and Jesus College, Oxford. Harriet’s thesis is focussed on the depiction of marginalised French characters in the works of the English author Mary Robinson.  More generally, she is interested in female experiences of disability in the literature of the Romantic period.

Rachael Sparkes is an actor and artist who trained at East 15 Acting School in London. She has performed in numerous high-profile venues including The National Theatre and The Other Palace, while her film work has screened at the BFI IMAX and the Edinburgh Fringe. She is also a visual artist and launched her commission business ‘Sparkes art’ during lockdown to great success. Alongside her creative pursuits Rachael works with young people with a range of disabilities.

Nora Baker is a third-year DPhil student in French Literature at Jesus College, Oxford. Her current research focuses on memoirs written by Huguenot refugees following the Revocation of the Edict of Nantes in 1685. Originally from Galway, Ireland, she completed an undergraduate degree in French and Italian in her hometown and spent a year on Erasmus in Toulouse before coming to University College, Oxford, for her Masters degree. She is supervised by Catriona Seth at All Souls College.

Bridget Sinclair: "After many years working in administration for the NHS, I left to follow a dream and fulfil my love of literature to study for a BA Honours in English Literature. To develop a deeper understanding of Romanticism I have continued my studies with an MA in Literature, Romanticism, and the English Lake District with the University of Cumbria. I live in rural Northumberland. I was born with a cavernous arteriovenous malformation of the right hand and arm and two years ago I had an accident fracturing my right humerus resulting in permanent dysfunction. My own determination and well-being has been further inspired by women writers from our past who continue to have a positive effect on today’s society."

Clara Baudet: "I am a French and Spanish doctoral student at Jesus College, Oxford, working under the supervision of Prof. Catriona Seth. I focus on Grand Tourists and Marginal Figures in Early Romantic Naples and I explore the creation and consumption of stereotypes on the local population. I am also working alongside the Compton Verney Art Gallery to deliver outreach events for local schools. My Collaborative Doctoral Award is generously co-funded by the Open-Oxford-Cambridge AHRC DTP, the Clarendon Fund and Jesus College, Oxford. Prior to starting my DPhil, I completed a BA in Humanities and the MA in Political Theory at Sciences Po, Paris. I subsequently graduated from the MSt in Modern Languages (Enlightenment pathway) at Worcester College, Oxford. I also worked as a tutor for the Oxford School of French and mentored pupils at IntoUniversity. I am now a French Lectrice at St Hugh’s College, Oxford."

Siobhan Fennell: "I retired as a University Careers Lecturer when I was just over 30 as my Multiple Sclerosis deteriorated. Since then I have worked as a researcher and completed a Post-Graduate Diploma in Creative Writing. I am now unable to move from the neck downwards but have been lucky enough to be very active campaigning for disability rights and maintaining my writing for the last twenty years. I do not really write for publication but love to write poetical pieces for special people. I am a cherished wife and Mum which has given me the liberty and support to maintain an active lifestyle despite my disabilities."

This conversation is hosted by Jeff Cowton, Principal Curator & Head of Learning at Wordsworth Grasmere.

This workshop is part of the (Re)Acting Romanticism: Disability and Women Writers project, part of the Humanities Cultural Programme at University of Oxford.