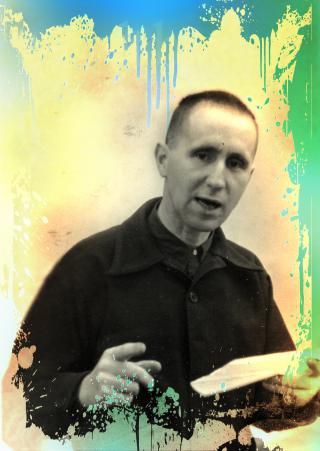 On the sixtieth anniversary of Brecht’s death, the IBS Symposium will turn its attention to ‘Recycling Brecht’, an opportunity to explore the myriad ways in which Brecht can be viewed as both recycler and recycled. On the one hand, participants are invited to reflect on how Brecht engaged in a process of ‘recycling’, through his tendency to revamp and recalibrate diverse kinds of source material. On the other, the theme encourages a consideration of how Brecht’s ideas and practices have been re-thought, re-imagined and adapted.

The International Brecht Society (IBS) and the Writing Brecht project at the University of Oxford, in association with the Oxford Research Centre in the Humanities (TORCH), invite scholars and artists in theatre, performance, and other cultural fields to Oxford for the 15th IBS Symposium on 'Recycling Brecht' from June 25-29, 2016.

Proposals will be invited on a number of areas related to the ‘Recycling’ theme, including questions of translation, adaptation, teaching Brecht and – in view of the 400th anniversary of Shakespeare’s death in 2016 – Brecht as recycler of Shakespeare. Invited speakers include the writer Tony Kushner, director Amal Allana (National School of Drama, India) and dramaturge Bernd Stegemann (Berlin), with more to be confirmed soon.

As ever, a broad programme of cultural events will accompany the academic programme, including song recitals, cabaret and theatre.

Proposals are invited for papers, workshops and posters at the symposium. Please click here for the full Call for Proposals.

The IBS was founded in 1970 on the model of Bertolt Brecht's own unrealised plans for a 'Diderot Society'. A non-profit, educational organisation with a world-wide membership, the Society promotes the performance and understanding of Brecht's texts and addresses issues of politics and culture in contemporary life. It also encourages and supports local, national, and regional groups with related goals. In Brecht's spirit of collaborative work, the IBS hopes that this Society will function as a clearinghouse, facilitating international contacts and exchange. It is committed to maintaining Brecht as a living force in the theatre as well as in the political and cultural arenas, so that he remains - as he wished - an 'unsettling presence'...

Click here for more information on the International Brecht Society.

Registration for the conference will open in Autumn 2015.

On registering for the conference, delegates will have the opportunity to book accommodation at St Hugh's College, where the symposium's academic programme will take place. The college will also be the location for all evening meals and for some elements of the cultural programme.

Rooms are available for delegates at a preferential rate. Booking will open in autumn 2015.

Click here for a map of Oxford showing the location of St Hugh's.

Compared to many Oxford Colleges, St Hugh's is young. It was founded in 1886 by Elizabeth Wordsworth, the great niece of the poet. But she had a strong sense of the historical perspective in which her new foundation would take its place.

Using money left to her by her father, a bishop of Lincoln, she named the College after one of his twelfth century predecessors, Hugh of Avalon, who was canonised in 1220, and in whose diocese Oxford had been. Elizabeth Wordsworth was a champion of the cause of women's education, and her foundation was intended to enable poorer women to gain an Oxford education. The first male undergraduates were admitted in 1986 and now the College has a roughly equal mix of men and women undergraduates.