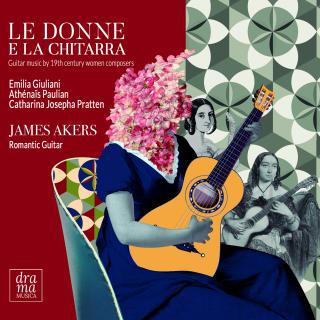 If the conventional narrative of the guitar caused the neglect of a great deal of music, the composers featured on this recording suffered the added adversity of being women in a male dominated world. They were overlooked by history, occasionally referenced, footnoted as anomalies but rarely championed or performed.

Critically acclaimed musician Jamie Akers was hailed as ‘the great Scottish guitarist’ by Classical Guitar Magazine and, in a review from Gramophone, his playing was described as, ‘containing all the warmth, colour and expressive richness one could hope for.’ Throughout a varied career, Jamie has explored various genres of music from a historical and stylistic perspective, combining diligent research with expressive playing to communicate the continuity of musical endeavour through the centuries.

As a continuo player Jamie has worked for major opera companies, English National Opera, Welsh National Opera, Opera North, Longborough festival opera and Innsbruck Festival Opera and orchestras and chamber groups including The Scottish, Irish and English Chamber Orchestras, Northern Sinfonia, the Royal Scottish National Orchestra, The Ulster Orchestra, The Essen Philharmonie, The Scottish Ensemble, with trumpeter Alison Balsom, and ventured into indie folk-rock with Damon Albarn. As a soloist, James has given recitals throughout Europe of lute and early guitar music. He has researched previously little known repertoire and released premiere recordings of forgotten works by significant composers.