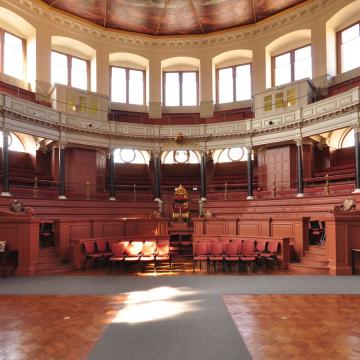 This event is free but booking is essential. Book here.

Even in the darkest times, music can remember, restore and reconcile. In the decade in which Europe was ravaged by the Great War, Ralph Vaughan Williams and Maurice Ravel drew on earlier musical memories to create masterworks that would themselves become memorials.  The Lark Ascending and Le Tombeau de Couperin (Couperin's Tomb) are complemented by an exquisite interlude by the Irish-French composer Augusta Holmès. La Nuit et l'Amour (Night and Love) forms part of Holmès’ symphonic ode Ludus Pro Patria (Patriotic Games), an evocation of Pierre Puvis de Chavannes’ great painting of Picardy youths in battle training.  A hundred years after the First World War, New Zealand composer Anthony Ritchie echoes the evergreen sounds of Vaughan Williams in a powerful oratorio commemorating the everyday people who strove to retain hope and dignity as the years of carnage shattered their humanity.

Music’s capacity to find connections across cultural and political divides is celebrated in the Parliament Choir, comprising members of both Houses of Parliament and staff of all parties. The Lords, MPs and their staff are joined by guest singers from New Zealand’s City Choir Dunedin, and the acclaimed Southbank Sinfonia which unites outstanding graduate musicians from all over the world, conducted by Simon Over.

This concert is sponsored by the Mellon Foundation in memory of John E. Sawyer and forms the conclusion of the year-long international seminar series Post-War: Commemoration, Reconstruction, Reconciliation.